Productive Versus Consumption Loans: A Distinction That Hurts Rather Than Helps

Why water and sanitation loans should be prioritized by MFIs. In the microfinance sector, lenders tend to divide loans into two broad categories: productive (income-generating) and consumption (non-productive).  Because they are lending to poor people with little or no collateral, there is a strong preference for productive loans because there is an assumption that the borrower will be able to repay the loan from the income generated by the loan.

Loans for “consumption” purposes, such as water and sanitation access (the sole focus of my organization, Water.org), are commonly perceived to be riskier, since there is no visible earning potential from a toilet.  Moreover, it would be hard for a lender to repossess said toilet in the event of default.

For these reasons, convincing more microfinance institutions (MFIs) to lend for this important need is harder than it should be.  Moreover, even when an MFI does lend for these items, they only offer the loans to “trusted” borrowers who have successfully repaid an income-generating loan.

A call to reject the productive/consumption dichotomy

Categorizing water and sanitation loans as “consumption” is problematic for more than one reason:

And I am willing to bet that other types of microlending suffer from the same misperception. Therefore, I would like to make a call to all microfinance professionals to reject this misguided labeling of productive or consumption. Instead, we must encourage lenders to think more comprehensively about new and emerging areas where microfinance can make a serious impact – and do so at essentially the same level of risk as other types of loans.

So how risky are water and sanitation loans, really?

Water.org has been assisting MFIs across South and Southeast Asia, Africa and South America to offer water and/or sanitation loans since 2004. While uptake was initially slow, Water.org loan data through March 2019 shows that 4.6 million loans for water and/or sanitation have been disbursed globally, totaling $1.7 billion. The average repayment rate is 99 percent. The pyramid below shows the deeper dissection of income levels (by Purchasing Power Parity, or PPP) of the borrower households. 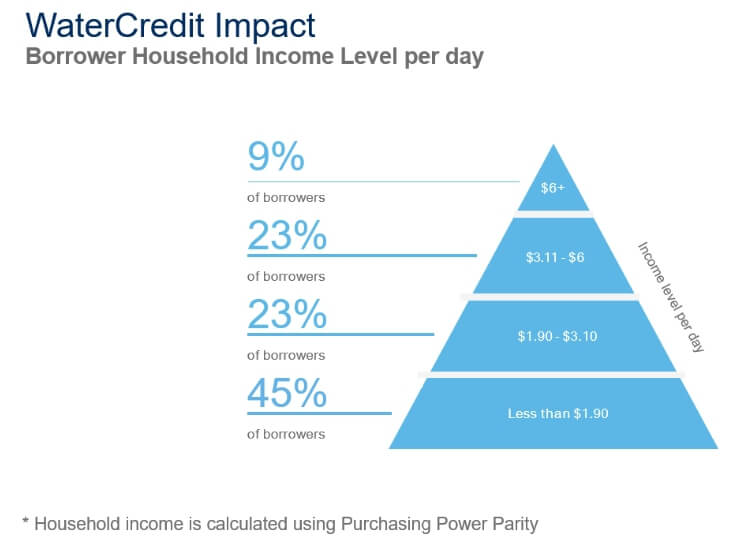 This data strongly suggests that the households taking these water and sanitation loans repay on time, despite the “consumption” classification of the loan. I offer a three-part explanation to unpack this reality, which ultimately boils down to the savings that borrowers experience on water costs, time and health costs.

Explaining the high repayment rates on water and sanitation loans

So what should lenders do with this information?

By and large, the decision to invest in a water and sanitation loan, or any other loan that is currently categorized as “non-productive,” is carefully weighed by the households who borrow. These loans have repayment rates that are on par with, if not better than, many income-generating loans and do not deserve to be considered higher risk and less appealing from a lender’s perspective. In short, lenders should be more open to offering these loans.

In most of the 13 countries where Water.org works, water and/or sanitation loan amounts are substantially lower than the average income-generating loan. Savvy MFIs could offer these loans as “starter” loans for households that are currently financially excluded, with successful repayment establishing the credit history a borrower might need to qualify for a larger productive loan. This approach could enable an MFI to expand its client base while bringing more people into the formal financial system.

In conclusion: Look beyond productive-consumption categories to examine indirect outcomes

The productive-consumption loan distinction hinders microfinance and financial inclusion by encouraging lenders to broadly distinguish between loans that generate income and those that don’t, without looking more deeply at indirect outcomes. This simplistic categorization ends up contradicting the larger goals of the microfinance sector and needs to be re-evaluated.

Lesley Pories is Manager of Sector Strategy at Water.org, where she focuses on how the organization can effectively partner with peers to drive systems change and shape the global conversation around pro-poor finance for water and sanitation.

Write for us
View 4 Comments

Hi Lesley, great points. Somen Saha wrote in an article about microfinance institutions that integrate health programming that MFIs in India that provide health loans (which in some cases, I think get used for water/sanitation investments) are often considered "long-term investment loans" versus "consumption loans", because they do not produce value (in terms of cash inflow) in the short-run. I wonder if this is a way to think about these types of credit products, in that they either are risk-management investments or long-term investments--which can have long-lasting benefits to the borrower--versus, as you say, "consumption or non-productive" loans.

It is very interesting article as a call to MFIs.
The fact is that the Poor's need is so diversified, which includes not only "productive loan" but also "Non productive loan". For example, when they are lack of food or water, they need loan for their consumption to be exist, to live before thinking about the production.
In such situation, MFI need to address the social issue before the economic one. In such way, the microfinance address the broader goal of the institution.
Thanks for sharing this.
Regards,
Tuan in Vietnam

As a micro-finance practitioner and now as investment adviser this issue has come up many a times. It was dealt by giving a different perspective to the concept of production or rather consumption.
"There are certain investments that reduce your const of living substantially and adds to your savings. Because you get a better service, technology or alternative to address a particular cost. Examples are Solar, Biogas, Clean water equipments etc. which reduces the burden of you expenditure kit. Such investments were listed out, economics were worked out and included as production loans. Because for the poor reduction in expenses also is a income per-se.
If you could convince this logic with the MFIs I think we could solve the issue to a great extent
0091 9446078394

This article provides a good insight that has been neglected by financial institutions for a long time. this talk exactly to the role of financial institutions in contributing towards inclusive economic growth. the provision of water and sanitation loans will ensure that we have a healthy population and therefore directing their energy and time to more productive use. Hence we argue that financial institutions need to be efficient in their provision of financial services and products. I fully agree loans directed towards water and sanitation should not be considered consumptive but productive if it will enhance the health of those who are being served.
thank you for this very good insight

Lesley Pories is Manager of Sector Strategy at Water.org, where she focuses on how the organization can effectively partner with peers to drive systems change and shape the global conversation around pro-poor finance for water and sanitation.

Mobilising Finance for WASH: Getting the Foundation Right

Microfinance for Water and Sanitation: Opportunities and Challenges for MFIs