Women’s entrepreneurship is on the rise globally, though it still lags behind men’s in most countries. Whether driven by necessity or ambition, women are challenging widespread cultural norms that limit their economic participation, while they also provide an important source of income for their families. The challenge is how to get female businesses out of a survivalist mode and onto a pathway of growth.

This task is especially difficult in Jordan, where the number of women-owned firms actually decreased between 2005 and 2016 and most female-run businesses are extremely small. Social attitudes play an outsized role in limiting women’s financial autonomy and overall economic participation. According to the Global Entrepreneurship Monitor, Jordanian businesswomen struggle against “higher levels of domestic responsibilities, lack of female role models…and a culturally-induced lack of assertiveness and confidence in their ability to succeed in business.”

The unique profile of female borrowers in Jordan

At FINCA International, we are tackling this challenge. FINCA Jordan has consistently (and unexpectedly, given the low rate of women’s business ownership) achieved the highest rate of female participation - 92 percent - across a global network of 20 microfinance institutions and banks collectively known as FINCA Impact Finance. A portfolio of women-centered credit products is central to this achievement, including solidarity group loans, micro-enterprise credit and loans for household purchases.

But the women served by FINCA Jordan are different from the rest of FINCA’s female clients around the world, who are usually the main breadwinners in their family. In Jordan, female borrowers are more likely to be married, living in a male-headed household and earning a supplementary income (Figure 1). They are also much younger, at just 25 years old, versus a global average of 40. 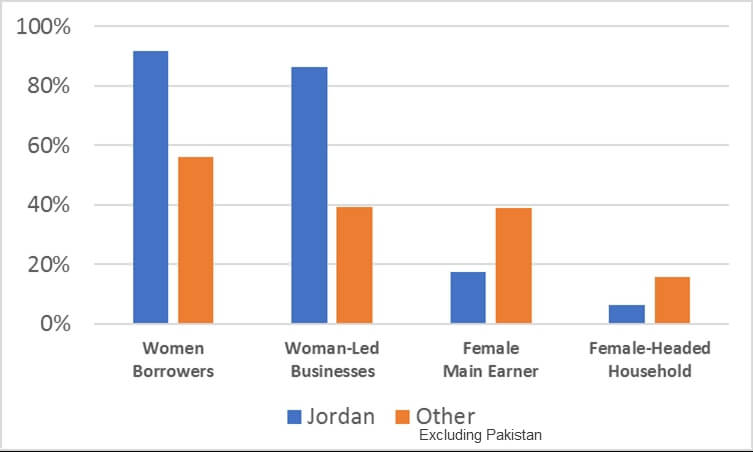 The challenge for FINCA Jordan is that a young, married woman earning a bit of side income has different motivations than a mature single mother whose business is the main sustenance for her family. Expectations are lower and sacrifice is less attractive. As a result, the path to growth is less clear, both for clients and the bank itself. Our data shows that women’s enterprises in Jordan are seasonal and tentative, with a low rate of formal registration - only 5 percent, compared with 53 percent for men (Figure 2). 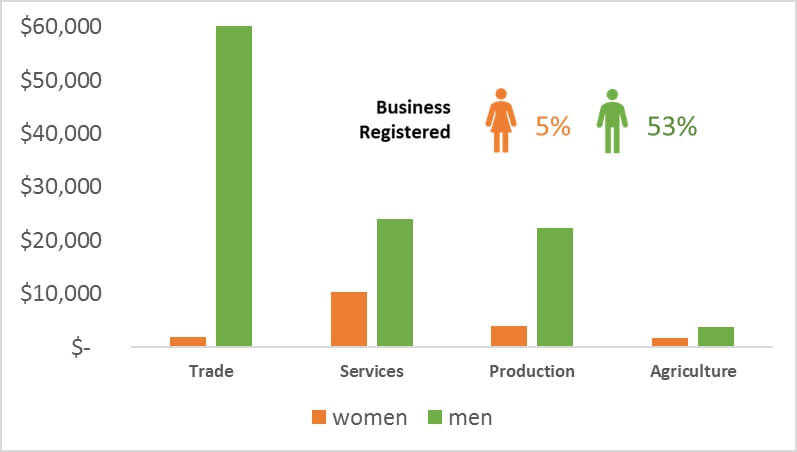 Most striking, however, is the vast difference in profitability between men’s and women’s businesses. Trading activities, which are lucrative for men, generate miniscule earnings for women, who perhaps lack the experience and social connections that foster opportunity and growth. Gender differences in the other sectors are marginally lower but still severe.

Access to finance can start the journey toward empowerment

Despite these challenges, FINCA International believes the transformative power of financial inclusion can be realized through women’s business activities, which enhance their independence, social status and income. By contributing her income toward important family projects, a woman can strengthen her authority in the household, though this impact is highly sensitive to cultural factors. (We also cannot rule out unintended negative consequences.) In that respect, we were encouraged by data that we collected in 2017 showing that FINCA Jordan’s female borrowers express clear goals regarding their loan proceeds, often focused on improving their homes or buying an asset. By enabling women to contribute substantially to the family’s material aspirations, FINCA hopes to strengthen their status and authority in the household. These effects can be magnified by digitizing the financial services, which offers women greater privacy and control over their resources.

The very presence of a women-centered financial institution sends a public signal that women are a valued part of their community’s economic life. The impact of these meso-level influences is not widely studied, but there is some evidence that they could be important at the community level, where social attitudes are reinforced. Local impact is also strengthened by networking between female clients. Knowing a successful entrepreneur increases the likelihood that a woman will venture into business herself and it helps mitigate the fear of failure.

Fighting a rising tide of inequality

Financial inclusion offers a practical way to foster women’s ambitions and push back against a rising tide of inequality in Jordan, whose ranking on a range of gender equality indicators fell from 93 to 135 (out of 144 countries) between 2006 and 2017. To change this trajectory, women-focused institutions need the resources to reach significant scale and to improve their products, including digital financial services. At the same time, complementary services such as financial and business training are needed to reinforce entrepreneurial attitudes and support women’s ambitions. The near-term impact of these interventions will be constrained by powerful social forces, but they are all the more important for that very reason.

What Would People Say?

How To Transform Gendered Norms

Beyond Access: Shaping a Gender-Transformative Approach to Financial Inclusion

How Many Years Will it Take to Close the Gender Gap?

Social Norms Are Difficult To Change, Can Entertainment Help?