The “Graduation into sustainable livelihoods” approach or “graduation” is a term that refers to a range of intensive and targeted economic inclusion programs addressing multiple constraints and offering a sufficient and time-bound package of support to help program participants achieve sustainable income earning, increasing their assets and resilience.

While poverty rates have seen a spectacular decline over the past two decades, 736 million people still live in extreme poverty and suffer from social, economic, and political exclusion. New World Bank data shows that the rate of extreme poverty reduction is slowing. Deeply targeted household-level economic inclusion approaches have a proven track record not only in reaching the poorest, but also in ensuring sustainable pathways out of extreme poverty.

The graduation approach is a “big push” intervention designed to overcome the multiple barriers that prevent very poor and vulnerable households from building sufficient income, assets, and human capital to get onto a pathway out of extreme poverty and into sustainable livelihoods. Following BRAC’s pioneering work in Bangladesh since 2002, the graduation approach was piloted by CGAP and the Ford Foundation in ten pilot sites from 2006 to 2014. Graduation programs typically consist of a coordinated and sequenced multi-sectoral package of support over 18-36 months, including:

Rigorous research, including Randomized Control Trials of the original pilot projects, the early BRAC program, and additional graduation-type programs has demonstrated the effectiveness of this targeted economic inclusion approach. Nearly all of the programs studied were shown to effectively reach very poor and vulnerable households and reliably and sustainably increase their food security, income, assets, and resilience in diverse countries. A wave of innovation is now underway to adapt the program to additional population segments including refugees and displaced persons, indigenous people, residents of urban areas, and communities affected by fragility, conflict, and climate change. Many implementers are also taking a more deliberate approach to increasing women’s empowerment, beyond merely improving their financial position, by testing program innovations. 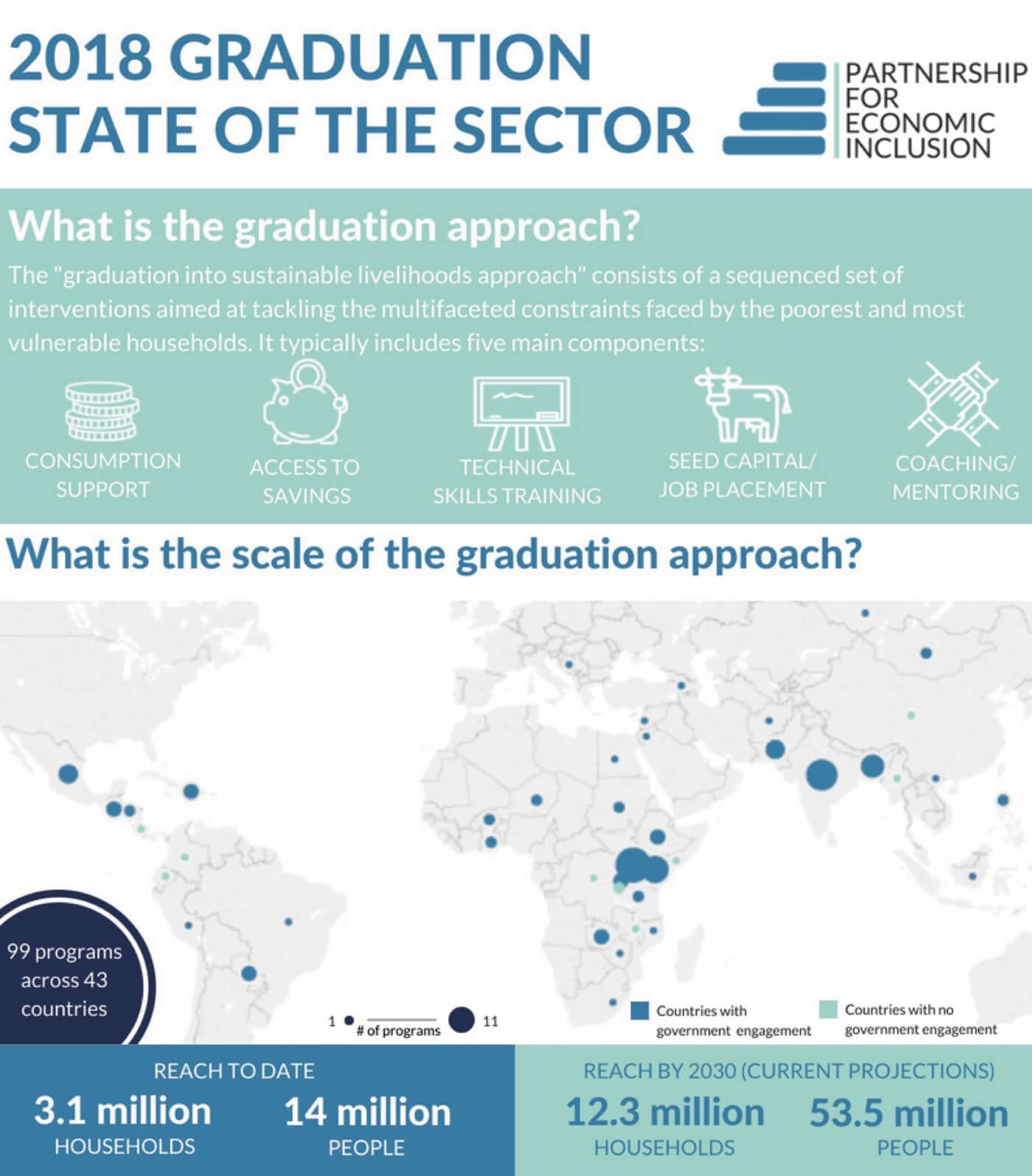 The Partnership for Economic Inclusion (PEI) is a global partnership hosted at the World Bank’s Social Protection and Jobs Global Practice with a mandate to extend economic opportunities to extreme poor and vulnerable households. It is the platform for the large Community of Practice that was built over the last decade. Its mission is to accelerate innovation and large-scale adoption of effective and scalable household-level interventions to help households increase their incomes, assets, and resilience, as a critical step on the pathway out of extreme poverty. PEI’s central focus is on helping governments integrate these interventions into large-scale social protection systems and anti-poverty programs, as a critical way to build human capital in a sustainable and cost-effective manner.

Important Announcements from the Partnership on Economic Inclusion:

Watch the Webinar Recording on the PEI 2018 State of the Sector Report. Organizations implementing the graduation approach need tools to manage their different program components effectively. Mobile and cloud technology are helping them to support poor women on their path out of poverty. 2018 State of the Sector: Synthesis Report From Extreme Poverty to Sustainable Livelihoods: A Technical Guide to the Graduation Approach, Second Edition The latest news and upcoming events and training from the global financial inclusion community on this topic.

Summary Report of the Partnership for Economic Inclusion Partners Summit

Webinar Recording Available: The PEI 2018 State of the Sector Report