Who Sends Money to Whom? Gendered Flows of Mobile Money in Kenya Kenya has been called the epicenter of mobile money. The 2014 Findex found that over 89% of Kenyans have used mobile phone services to send and receive remittances. Individuals who use money transfer services are often part of dense family networks, who in addition to sending and receiving money, use mobile phones to pool money and fundraise for specific needs such as school fees or medical care. Our research in Western Kenya reveals the central role that women play in these networks and how matrilineal ties drive money flows.

Social Networks of Mobile Money in Western Kenya, by Steve McCord & Sibel Kusimba, with support from the Institute for Money, Technology and Financial Inclusion at the University of California, Irvine.

During our research in 2012-2014, we created mobile money drawings for twelve families, in which we mapped out the different sending and receiving connections between family members. We wanted to understand the roles of women in mobile money networks with reference to the historic and ethnographic context. What kinds of kinship ties do women form, and with whom? What historical contexts, norms, and ideas inform the kinship ties of mobile money?

Through this exercise, we found that mobile money sending tends to reinforce already existing social connections and longstanding networks of reciprocal giving. Money transfers tended to link up siblings with their mothers, and through their mothers to their mother's siblings and other close relatives This does not mean that men participate less in family networks of mobile money but they do so more often as brothers, mother’s brothers and sons rather than as husbands and fathers.

Money networks are reciprocal, such that senders are also receivers, and individuals have many connections through which to access resources. Some individuals are “central” in networks, having more connections; others broker flows of e-value from one group of relatives to another. In many families, siblings and other close relatives use mobile money to contribute regularly to informal savings or insurance plans in anticipation of funerals, weddings, medical care and educational fees. The data shows that mobile money transfers are used to reach out to friends and family both near and far, across urban and rural divides, between wage-earning and farming families, and across gender and age differences.

The mobile money drawings also illustrate the importance of women as social connectors. Figure 1 shows mobile money flows recorded in 2012 among a family with members living in the rural hamlet of Naitiri, the Kenyan capital of Nairobi, and Chicago, United States. The two main groups in Figure 1 are the children of a pair of sisters. A 67-year old farmer I will call Dorcas (red circle) receives remittances from many of her eight children (dark blue) and 44 grandchildren (gray), in turn circulating them back to her children but also brokering these resources with her deceased sister’s oldest daughter (green circle), who in turn sends and receives remittances with her siblings (also in green) and their children (in orange). Dorcas’s network also receives international remittances from the United States from one son and one daughter (light blue). 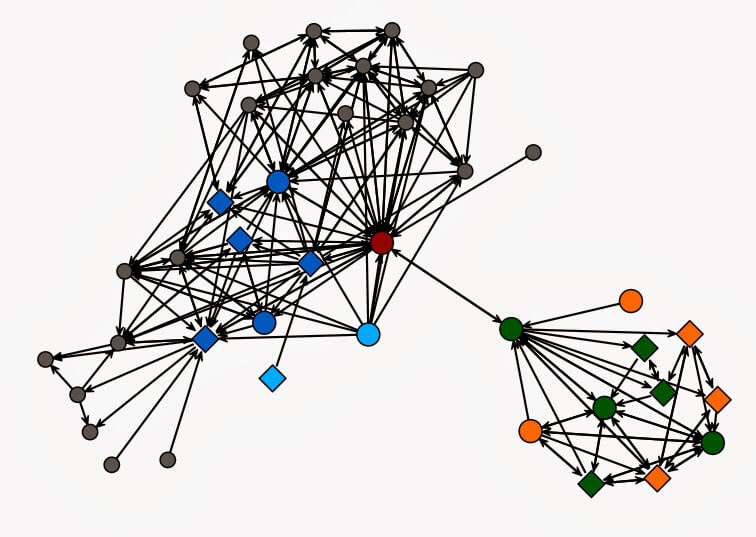 Matrilineal flows of mobile money often give mothers and grandmothers the potential to be brokers. Women who regularly received remittances from husbands, brothers, parents, sons and daughters could in turn become senders and decision-makers around important financial and family matters. For example, Dorcas has a position of advantage in the above network as she is the only connector between two groups of siblings. However, we found that instead of trying to take advantage of their centrality to gain power as brokers, women often used their positions to recirculate funds and create new, close connections of benefit to the group.

Dense networks may in fact also reflect the limited social prestige and authority of mothers and grandmothers who, on maps of mobile money, are so central in collecting remittances. Several months after my field research in the summer of 2012, Dorcas was hospitalized with typhoid. Her son in Chicago told me that her children in Kenya had been unable to raise the 40,000 Kenya shillings (about USD 600) necessary for her release. Dorcas continued to accumulate a bill for two weeks after her treatment while she waited to be let go from the hospital. Despite her position of advantage as the only connector between two sending and receiving groups, Dorcas was still ultimately at the mercy of the disagreements within her network.

Dense networks of mobile money result from strategies that value reciprocity, communication and trust. The obligation to recirculate often leaves individuals, even brokers, without the resources they need. A request cannot be denied; instead one’s phone must be shut off or “lost” to avoid pressure for remittances. Even in dense networks people may try to avoid sending money, and arguments and secret remittances may occur. Gendered flows of mobile money provide a safety net and reduce risk, but often the resources sent are not enough, or cannot be held on to long enough, to prevent a mother from languishing in the hospital while her children squabble over the bill.

Understanding that money transfer services are used to distribute money in families and groups, not just to send and receive it, could open up new possibilities for products and for provider engagement with customers. This could include products that leverage social ties or a lifestyle product such as a social network platform. Social network analysis can help financial service providers to understand how people use a variety of social and financial tools and suggest new ways of financially including women and other diverse customers.

Sibel Kusimba is an anthropologist who studies the role of mobile money in Kenyan society and culture. She currently teaches at American University, and also taught at Kenyan universities through a Fulbright grant in 2010.

Sibel Kusimba is an anthropologist who studies the role of mobile money in Kenyan society and culture. She currently teaches at American University, and also taught at Kenyan universities through a Fulbright grant in 2010.

Using Your Data to Drive Growth in Mobile Money Services: The Mobile Money Customer Journey with a Gender Lens

The Long-Run Poverty and Gender Impacts of Mobile Money