How to Bring More Women into Mobile Money An important path to improving development outcomes for women begins with access to financial services. But as we know, that path is often blocked by considerable barriers - cultural, technological, and others. Women are largely excluded from the financial sector, and adoption of mobile money by low-income and low literacy groups is hindered by cultural norms as well as technology that is not designed to engage this potential mass market.

GRID Impact set out to tackle this problem in Pakistan with Karandaaz, a nonprofit development finance company that promotes financial inclusion for individuals through digital solutions. Together, we designed interventions to overcome some of the barriers to mobile money adoption by improving the user experience (UX) and user interface (UI) design of mobile money smartphone apps for various providers in Pakistan. We created a design toolkit that addressed the needs of current mobile money customers while also including design features specifically for women, low-income and low-literate users. The UI/UX design was intended to support providers in growing their customer base to include a low-income female market.

How we conducted the research

Our team of designers and researchers used a behavioral and human-centered design process to ensure that we were creating solutions with women, not just for women. During our initial “discovery” phase, we conducted a series of in-depth interviews with providers, mobile money agents, mobile money customers, and people not yet using mobile money. Behavioral insights from these interviews helped us develop three unique concepts for the UX/UI design of a mobile money smartphone app, which we then refined into prototypes for users to interact with, allowing us to collect additional feedback.

For the first stage of testing, we used low-fidelity paper prototypes and participatory research activities, such as card sorting, to test different user interface designs and features with end users. This helped us to identify and co-create the most appropriate visual assets such as menu icons and other UI elements, as well as the right sequence of steps for key flows, such as checking account balance and making a transaction.

For the second stage of the testing, we arrived at two concepts for which we developed high-fidelity, clickable prototypes that simulated the app on mobile devices common in Pakistani markets. By allowing users to interact with prototypes on a mobile device and walk through specific tasks, we better observed the usability of our designs, where people encountered difficulties, and how they interpreted what they saw on the screen. After final iterations, we identified a solution that we could confidently share with mobile money providers in Pakistan.

What we learned, and how we solved the challenges 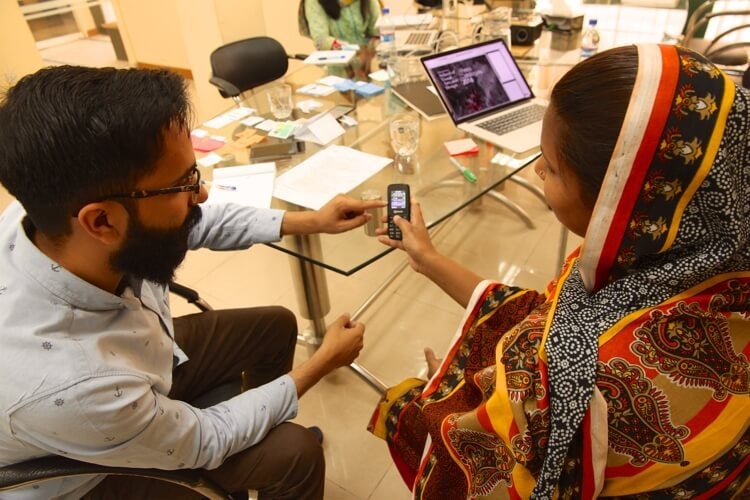 We also found that non-English speaking customers had the option to switch the smartphone language to Urdu, but often stayed with English, showing the aspirational nature of the phone, a feature we preserved.

In each case, understanding how women conceived of mobile technology and platforms, and adapting based on their input early in the process, allowed us to create a more usable product more quickly.

Our interventions aimed to encourage design for the masses, to help capture both the higher-income customers that providers are currently vying for, and the potential market of the underserved poorer women GRID and Karandaaz have the intent to reach for financial inclusion purposes.

The project’s results have already shown strong increase in uptake, use and retention. The toolkit we designed for all providers in Pakistan resulted in JazzCash, one of the leading mobile money providers, partnering with Karandaaz to incorporate the design toolkit. The next trend we see is for the mobile money industry to further adopt human-centered design principles broadly, as a core strategy of their market expansion plans.

Alexandra Fiorillo is Founder and CEO of GRID Impact, a collective of designers and behavioral scientists that solve social impact challenges around the world.

This blog is part of a knowledge series by the FinEquity Community of Practice. The COP promotes learning amongst its members and the broader financial inclusion community on overcoming challenges and spurring innovations that further gender equality in access to and usage of financial services.

Alexandra Fiorillo is Founder and CEO of GRID Impact, a collective of designers and behavioral scientists that solve social impact challenges around the world.

This blog is part of a knowledge series by the FinEquity Community of Practice. The COP promotes learning amongst its members and the broader financial inclusion community on overcoming challenges and spurring innovations that further gender equality in access to and usage of financial services.

Using Your Data to Drive Growth in Mobile Money Services: The Mobile Money Customer Journey with a Gender Lens

Reaching Half of the Market: Women and Mobile Money