5 Things You Should Know About Financial Services for Refugees

High repayment rates, technology solutions, and new research tell us that it’s time for the financial industry to think about refugees There are 68.5 million people displaced by conflict or persecution worldwide, 25.4 million of which are refugees. The financial industry has largely overlooked this population as a viable segment, perceiving them as too risky. Nevertheless, mounting evidence shows that refugees are as credit-worthy as nationals and deserve to be included in the financial system. Here are five things you should know about financial services for refugees.

1. Refugee loan repayment rates are just as high as those of non-refugees.

Last year the crowdfunding platform Kiva launched the World Refugee Fund to catalyze lending to refugees. The Fund expects to deploy over $26 million in loan capital by the end of 2020. In its Refugee Impact Report released this month, data from Kiva’s 11 field partners across six countries show that the 7,800 refugees and internally displaced persons (IDPs) who borrowed from these institutions had repayment rates of 96.6 percent, as high as non-refugee borrowers (96.8 percent) during the same period.

Among the pioneer financial service providers (FSPs) lending to refugees, Al Majmoua is recording the highest outreach in the market, with exceptional repayment rates. As of the end of April, the Lebanese microfinance institution (MFI) was serving 8,520 Syrian refugee clients through both individual and group lending methodology, with a PAR>30 of 0.43 percent.

Another MFI in Jordan, Microfund for Women (MFW), at the end of May has also achieved an impressive portfolio of 4,047 Syrian refugee borrowers, served through group lending methodology, with a PAR>30 of 0.38 percent. And next month, MFW will also begin disbursing start-up business loans and educational loans to Syrians.

2. Direct engagement with refugees is key for raising awareness and overcoming misconceptions.

UNHCR has been making special efforts to bring refugees and FSPs together where they can interact face-to-face. Through workshops in Tunisia, Morocco and Albania, FSPs had the chance to conduct preliminary financial needs assessments of refugees in their cities. By the end of the assessments, which included focus groups and business visits, most of the providers noted that engaging directly with refugees helped them to change their perception of refugees from that of a risky segment to a potential creditworthy clientele.

Among these providers, the Tunisian microfinance institution Enda Tamweel, has already set up a pilot with a number of refugee entrepreneurs in Tunis, and is now preparing a second pilot phase in the Sahel area. The MFI will also accompany some refugees as they start up their businesses through a program for new entrepreneurs. 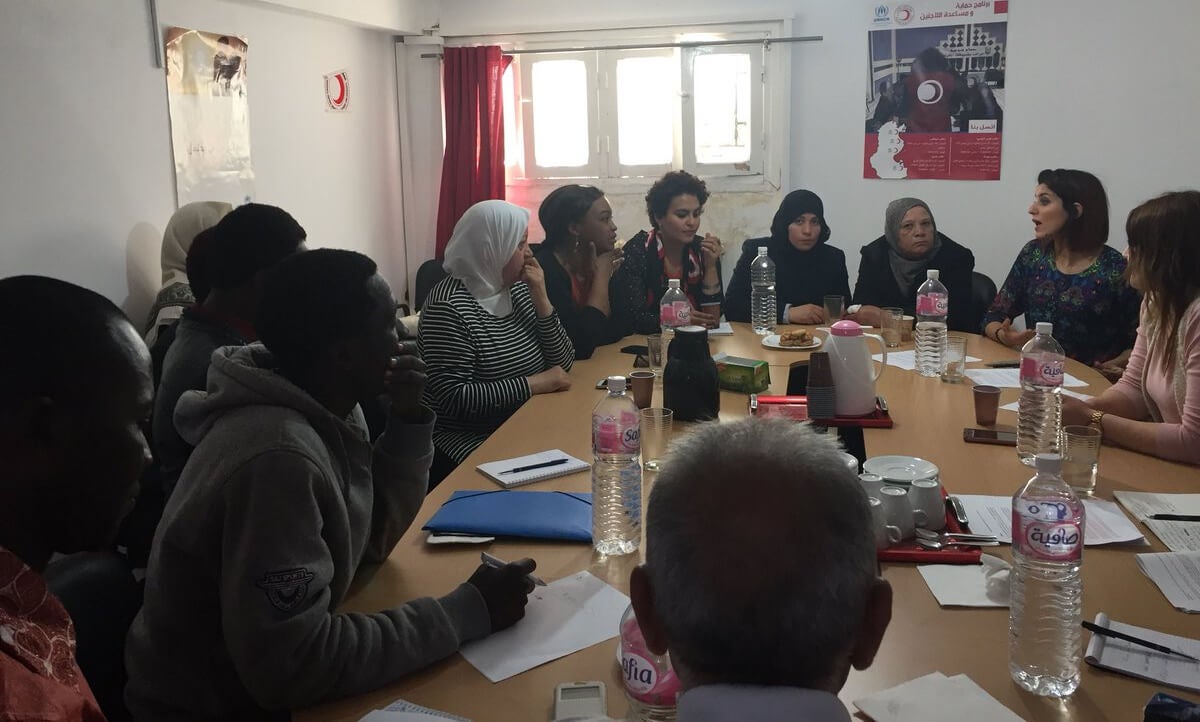 3. Digital technologies have the potential to vastly improve financial services for refugees.

Advancements in digital payments technologies have a great potential for serving the forcibly displaced on a larger scale, and at a lower cost. Their potential has already been leveraged by UNCDF in Uganda and Zambia to digitize cash-based interventions (CBIs). In Uganda, the UN agency recently completed a pilot with the international NGO DanChurchAid and mobile network operator Airtel to pay refugee beneficiaries their monthly CBIs via mobile money. In Meheba camp in Zambia, UNCDF and UNHCR partnered to launch the first digital payments through mobile money in April this year, reaching 47 percent of the targeted 1,849 beneficiaries through mobile money wallets.

Remittances can also benefit from digital channels. In Rwanda, Worldremit and Useremit are now introducing alternative remittance services to refugees. The expectation is that soon refugees in the two longstanding camps of Gihembe and Kiziba will be able to cash out through mobile money or directly into their bank accounts.

Last November, for the first time in 20 years, five FSPs were invited to the Gihembe refugee camp in Northern Rwanda, which is home to over 12,000 Congolese refugees. In this camp visit, organized by Financial Sector Deepening Africa (FSDA), AFR and UNHCR, the FSPs had the chance to participate in a Product Design Sprint, which involved ideation, prototyping and testing of products tailored around the specific needs of the refugee community in camps.

A month later, FSDA and AFR ran an innovation competition where they awarded accelerator grants to five financial service providers in Rwanda to develop refugee finance product concepts, including:

5. New research will help us to overcome barriers and get refugees the financial services they need.

Hot off the press is UNCDF’s Global Remittances Toolkit, which aims to help identify and address the unique barriers and needs of refugees in accessing affordable and regulated remittance channels. The toolkit, which was developed in collaboration with Bankable Frontier Associates (BFA) and with support from UNHCR, was first implemented through a Country Assessment in Uganda.

And we’ve got more research coming up which should help us to keep improving the services offered to refugees. Along with Grameen Credit Agricole Foundation and the Swedish Development Agency (Sida), we’ve commissioned Microfinanza to perform market assessments in Uganda and Jordan, two of the countries hosting the highest number of refugees in the world – over 1.4 million and 750,000 respectively. The studies are aimed at gaining deeper insights into the financial needs of the refugee populations, and are tied to a debt-funding and technical assistance facility that the three organizations have set up. The reports will be released in July, so stay tuned!

Micol Pistelli is a financial inclusion officer at the United Nations High Commissioner for Refugees (UNHCR).

Write for us
View 6 Comments

...and the Dutch Investor Platform is following up with direct, practical diagnostic TA to 4 FSPs in Uganda aimed at resolving some of the constraints FSPs associate with onboarding FDPs. In addition, 13 FSPs from Jordan and Lebanon will meet in a 1.5 day workshop to seek common ground on approaches, challenges and opportunities to serve refugees. Both country level efforts will be featured at the NpM Conference ‘Finance for Refugees: Making it Work’ in September to clarify how finders and investors can support more and better coordinated financial inclusion for refugees and other foreign-born residents.

Bangladesh Bank taken an initiative to financially include Rohingya refugees in Bangladesh. Humanitarian assistance would be provided through agency banking and prepaid card. The polit project would be started very soon.

This report should include Equity Bank in greater detail, the only bank serving refugees in Kakuma and Dadaab refugee camps in Kenya.
We are serving over 40,000 refugees through various products and services
Regionally, we have cash payment services in Rwanda, SS and Uganda

Data needed to be checked:
"refugees and internally displaced persons (IDPs) who borrowed from these institutions had repayment rates of 96.6 percent, as high as non-refugee borrowers (96.8 percent) during the same period."

Micol Pistelli is a financial inclusion officer at the United Nations High Commissioner for Refugees (UNHCR).

Refugees and Their Money: The Business Case for Providing Financial Services to Refugees

Remittances and Financial Inclusion: A Demand-Side Analysis of Low-Income Jordanians and Syrian Refugees in Jordan

Microfinance for Syrian Refugees: The Lebanese and Jordanian Market

Removing Barriers to Expand Access to Finance for Refugees