Racing To Become a Leader in Digitally-Enabled Financial Inclusion Without visiting Ethiopia, it’s hard to gauge the country’s movement towards a digital economy. But our in-country assessment and conversations with industry stakeholders revealed that Ethiopia is racing to become a leader in digitally-enabled financial inclusion.

Ethiopia challenges many assumptions of how to create a functioning DFS ecosystem. Our initial assessment uncovered three positive findings:

One telco, one delivery channel

The single, state-owned telecommunications company is protected from competition, at least for the time being, yet has aggressive targets to move from 60 to 100 million subscribers in coming years. Government mandates for network expansion and vendor financing just might provide the ingredients for continued network improvements.

Mobile phone ownership rates are rising and handset prices are falling. Expecting to hear issues of inadequate network coverage as a hurdle for DFS, we instead found 80-87 percent network coverage and a lack of concern about the absence of competitive offerings. The government is moving to digitize both government-to-person (G2P) and person-to-government (P2G) payment streams, services dependent on adequate network coverage. Of course, there are risks involved in dependence on a single telecommunications provider in a market – but it looks like this is something that could begin to change for Ethiopia in the years to come.

Banking sector with no foreign investment yet innovating on digital

The largest state-owned bank, the Commercial Bank of Ethiopia (CBE), launched its mobile offering (CBE Birr) in December 2017 with no-fee transactions and short codes to enable merchant payments, all while compensating its agents to incentivize recruitment and performance. Kifiya, a locally-owned technology company, acquired an MFI to offer integrated digital services, including G2P/P2G payments and data-driven agricultural index insurance. A start-up led by local entrepreneurs, Yenepay, has enabled e-commerce transactions through integration with CBE and other platforms. 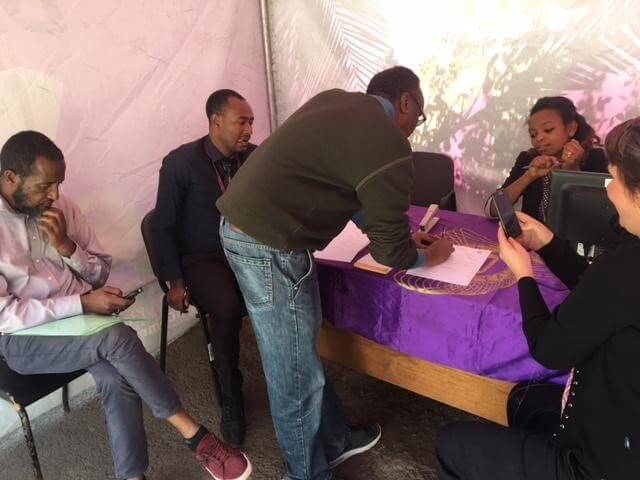 Prioritizing rural as the market opportunity

In many countries, reaching the rural market with agents happens only after urban markets have scaled. But bank branches are abundant in Addis Ababa and urban residents we met expressed little need to use agent or mobile banking offerings. In Ethiopia, the rural pastoralists in the lowlands and crop farmers in the highlands are the primary market.

Mercy Corps, as part of the USAID-funded PRIME project through the Feed the Future initiative, facilitated the initial agent banking offering of the Somali Microfinance Institution using the HelloCash technology platform. USAID, consistent with its agency-wide commitment to the Better than Cash Alliance, has funded the exploration and digital disbursement of the Public Safety Net Program (PSNP) payments it manages through NGOs, such as Food for the Hungry, which provide cash and food-based assistance during the hunger season. M-BIRR-branded agents reportedly disbursed PSNP payments to 400,000 households in 58 districts in 2017, and HelloCash-branded agents reportedly served 44,000 households with digital cash transfers.

Clouds on the horizon?

Despite seemingly strong momentum in Ethiopia, a few clouds on the horizon might slow progress in its DFS marketplace.

Digital Access: The Future of Financial Inclusion in Africa

Fintech As a Pathway to Financial Inclusion? The Case of China