New Global Findex: What You Need to Know

The latest Findex shows global progress on access to financial services, but it also illustrates challenges in reaching marginalized groups and increasing usage. The third global Findex was released with much fanfare at the World Bank’s Spring Meetings last week. And rightly so. This eagerly awaited data set is the financial inclusion community’s best demand-side measure of financial inclusion globally. With three years of time series data now available, Findex tells a compelling story of the progress we have made on access to financial services over the past six years, and it also illustrates the challenges we face in bridging the access gap for marginalized groups and increasing usage. What it doesn’t tell us — and what our community needs to examine as more people gain access to financial services — is whether and how financial services benefit the poor, and how to measure and mitigate potential downside risks.

Findex shows remarkable progress on access to finance for the poor across developing countries, with 515 million more adults globally reporting account ownership in 2017 than in 2014. India was a star performer in 2017. Roughly 80% of the country’s population now has a financial institution account, jumping from 53% in 2014. India also reduced its gender gap from 20 percentage points to six points. Sub-Saharan Africa also continues to make remarkable progress, with 10 countries in the region reaching at least 50% access and four reaching beyond 65%. Even very challenging markets like the DRC, Liberia, Malawi and Mali made progress.

As Asli Demirgüç-Kunt and Leora Klapper pointed out in a World Bank blog post last week, despite advances in women’s access to financial services in markets like India and Indonesia, the global gender gap remains unchanged at 7 percentage points. In some countries, low access rates for women bring down the national average significantly. For example, Pakistan would achieve far more than 21% access nationally if more than 7% of its women were banked. Bangladesh made impressive progress on inclusion generally, but mostly among men: the gender gap grew from 9 percentage points to 29 points between 2014 and 2017. Progress has also been made in rural areas. The percentage of rural households with an account increased from 44% in 2011 to 66% in 2017. Big shifts in China (58 to 78%), India (33 to 79%) and Sub-Saharan Africa (19 to 39%) are largely responsible. This is important, but there is clearly still much more to do, especially in Sub-Saharan Africa, where roughly 75% of the population lives in rural areas. As in many things, Kenya leads the way in the region. Rural Kenyan households with accounts grew from 38 to 81% between 2011 and 2017, largely thanks to the ubiquity of mobile money.

Importantly, Findex enables us to link progress to policy choices. CGAP will soon publish a report on the basic enablers of digital finance, namely, agents, nonbank issuers of e-money, tiered and risk-based KYC and appropriate consumer protection measures. By and large, Findex shows that countries with enabling regulations around agents, e-money and tiered KYC experienced substantial improvements in access. In addition, the rapid progress made in markets that leverage government-to-person payments, like India, Mongolia and Iran, demonstrates the role a broader range of policy choices can play in shifting access. This new evidence should encourage governments to adopt the kinds of policies that improve access.

Usage continues to lag, especially in markets that have taken large leaps forward in access. While India was a strong performer on access, it still has a usage challenge, with 48% of registered accounts remaining dormant. Growth in 90-day activity rates on mobile money accounts in Africa has also been slower than most would like. GSMA estimates these have grown from 26% in December 2012 to only 36% in 2017. But these figures understate an overall positive trend in usage rates. The denominator of registered accounts in both cases grew rapidly — by 27 percentage points in India since 2014 and by 25% in 2017 alone in the case of mobile money in Africa, according to GSMA's 2017 State of the Industry Report on Mobile Money. Given that new accounts are less likely to be used, this suggests that underlying usage rates may be better than we think. At the same time, it points to increasing usage as a central challenge for operators going forward.

We also know from GSMA that a larger number of use cases on an existing platform enhances usage. GSMA data show that the number of use cases besides person-to-person, airtime top-up and cash-in/cash-out is gradually increasing and includes bulk disbursements, merchant payments and bill pay. Findex confirms this, but also shows how much more room we still have to go to fully digitize payments. The number of people in developing countries who made or received a digital payment in the past year grew from 32% in 2014 to 44% in 2017. So we know that people are increasingly using digital accounts to make payments. 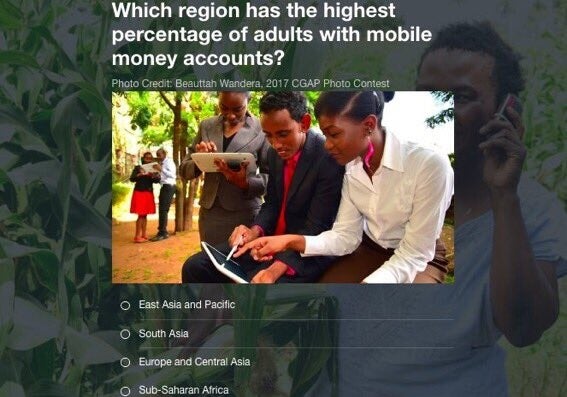 Take the Gateway Quiz on the latest Findex data!

For a few key use cases, Findex shows that there has been a gradual shift away from cash and toward more digital payments. For example, 53% of developing country respondents paid a utility bill in 2017, 27% sent or received domestic remittances, 19% received a government payment and 15% received an agricultural payment. For all of these use cases, the proportion of people using accounts for payments rose significantly, with the proportion using cash decreasing across the board. Continuing to encourage a shift away from cash across a range of use cases will help increase overall usage rates for digital finance.

What does this mean for poor people?

As a community, we still need to have a better answer for the ways in which access to financial services actually benefits poor people, whether through the direct use of financial services or because finance enables poor people to gain access to other basic services, such as electricity, clean water, health and education.  We have some useful data points from the research community, especially for payments and savings, but we are far from having a complete picture, especially for credit, which is of course the financial service that drives profitability for most providers. While well-being may require separate impact analysis to establish causality, there are things we can measure that are related to well-being — particularly, do these products do harm?

On a recent trip to Kenya, there was widespread concern about an emerging digital credit bubble. CGAP research bears this out. In Tanzania, we conducted a nationally representative phone survey on digital credit and discovered that half of digital borrowers had made late loan payments, and one-third were in default. There is a need to help governments track and remediate risks around financial services that are increasingly available to the poor, to improve providers’ ability to supply financial services responsibly, and to help consumers understand the financial products they are using and the consequences of defaulting.

I have been working in the financial inclusion industry for 18 years, and I have never seen the kinds of gains in access we have seen over the past decade. It is an exciting time to be involved in financial inclusion. But we still have much to do to reach marginalized groups, improve usage rates across the board and ensure financial services are provided in a healthy, sustainable manner. We at CGAP look forward to working with our partners to continue the journey.

Greta Bull is the CEO of CGAP and a Director at the World Bank Group. This blog post was originally published on the CGAP blog.

Greta Bull is the CEO of CGAP and a Director at the World Bank Group. This blog post was originally published on the CGAP blog.

2017 State of the Industry Report on Mobile Money

The Global Findex Database 2014: Measuring Financial Inclusion around the World