A Is for Agriculture

Despite the wide availability of microcredit in Bangladesh now, there are still millions of farmers who are unable to benefit from these loans. Repayment plans are not flexible, microfinance institutions (MFIs) require collateral, and existing loans have high interest rates, which according to our estimates range from 25% for MFI loans up to 200% from local money lenders. Additionally, cash loans make it easy for family members to pressure farmers into spending loan money for other needs like food, clothes and school fees. Once the loan goes into consumption, it makes it hard to repay because there is no additional income.

To address all these obstacles, the Agriculture Card, or A-Card, was designed. More than just a card, A-Card is a new financial model which promotes financial inclusion for smallholder farmers, especially women, by introducing an agricultural loan product with flexible payment terms matched to agricultural production cycles.

The A-Card business model is based on a digitized four-way linkage between the smallholder farmers, commercial banks, MFIs which act as agent banks, and farm input retailers. The commercial bank enters into a bilateral agreement with the MFI regarding profit-sharing from this arrangement. The bank provides the loan to farmers at an annual interest rate of less than 10 percent, with a flexible repayment within a six-month term, unlike standard MFI loans which generally have an annual percentage rate of 25-31 percent and require weekly repayments. The MFI guarantees the loan by maintaining a fixed term deposit with the bank. It also monitors loan repayments and provides capacity building for farmers. Farmers use their land size and crop choice to calculate what inputs they need, and to apply for loans. 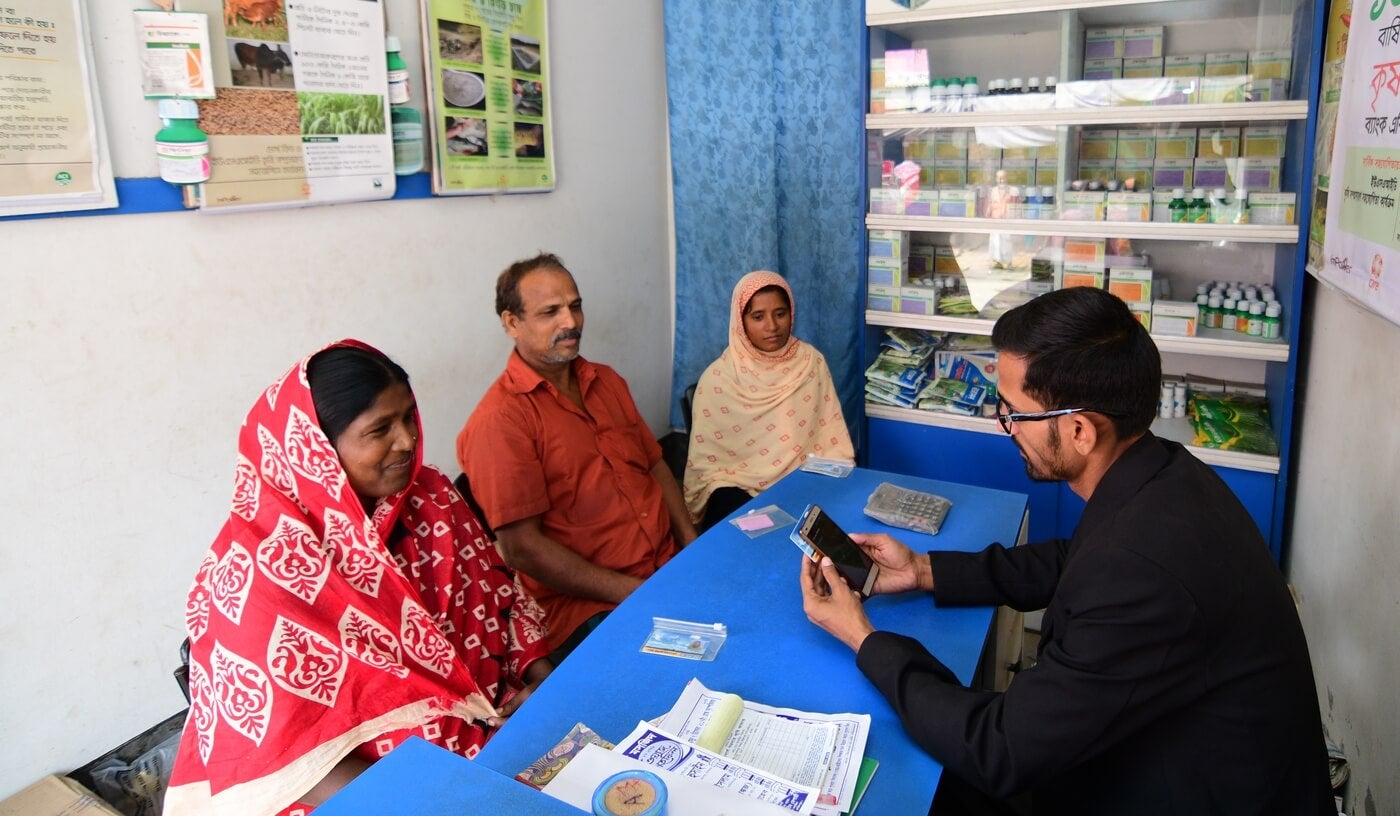 How does the A-Card help farmers?

By using the A-Card, farmers increase their production and income. Buying inputs in a timely manner means they can use them at the right time in the season, resulting in higher productivity. The longer repayment time means farmers get better prices because they can store crops for a longer period of time and sell at a higher price. Input retailers also see benefits because they no longer have to sell on credit. Instead, input cost is directly credited to retailers’ accounts when they sell to A-Card users.

The A-card also supports women’s empowerment. Because fingerprint and photo security put women directly in control of their cards, other family members can’t pressure them to spend the money in other ways. It also allows women to get easy access to credit and inputs, which has been a big barrier for women in Bangladesh. 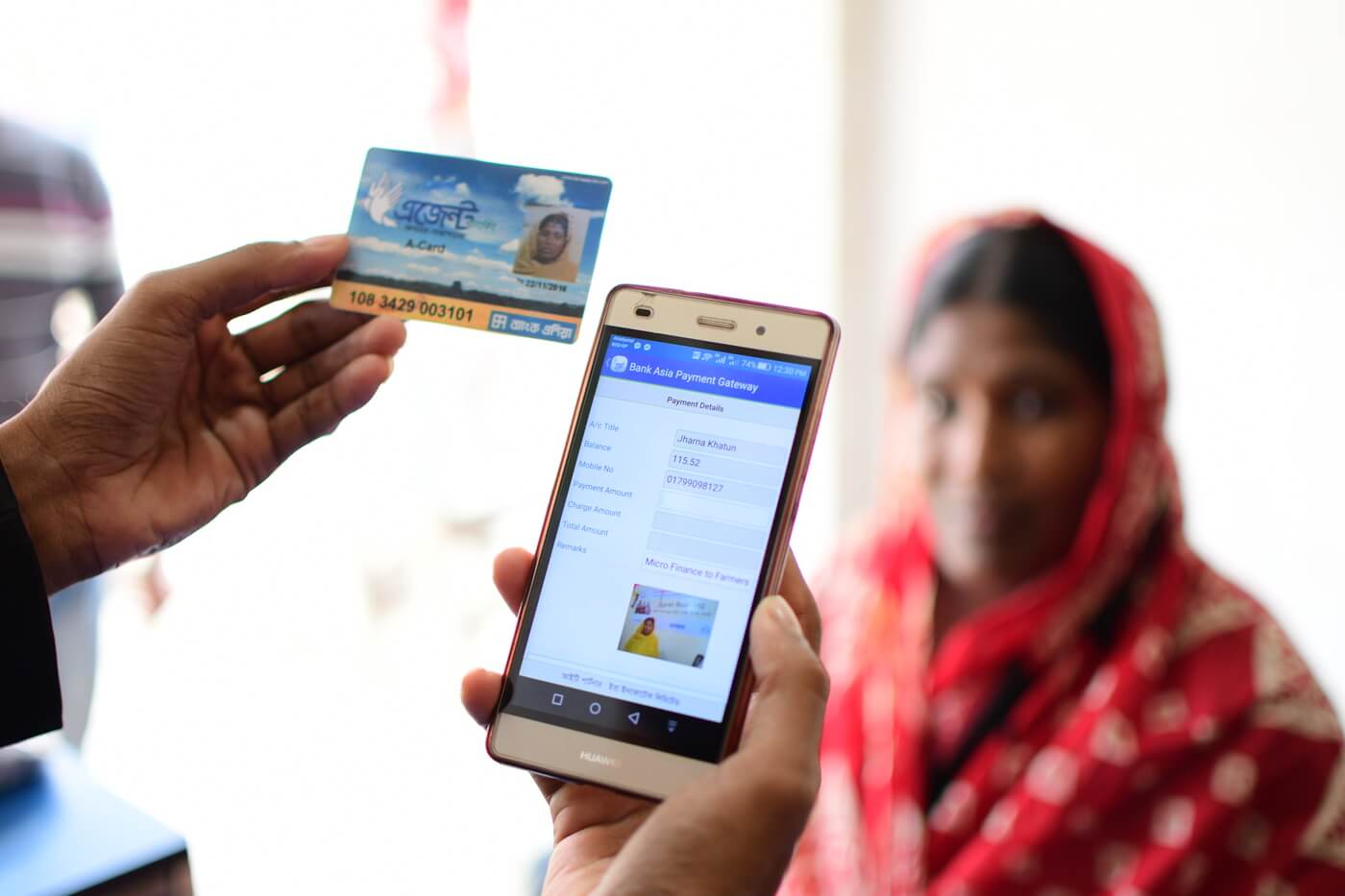 Challenges and lessons we are learning

The introduction of the A-Card has not been without its challenges. We have found that MFIs sometimes experience a conflict of interest between offering A-Card and microfinance loans. Since MFIs earn only a 1 percent profit on A-Card and a 25 percent profit on standard loans, they have more incentive to push standard products on customers instead of offering the A-Card. To avoid this, the team is experimenting with individual local market actors like input retailers or Local Service Providers as a banking agent for this pilot.

Another lesson learned from the A-Card is that local bank staff didn’t have incentives to sell this product because it was not tied to their performance goals. We are currently working with banks to develop new incentive structures to overcome this.

An individual study shows that farmers who have an A-Card are using proper agricultural practices, resulting in an average 25 percent increase of their production and income. It also found that the model not only helps farmers but also local retailers who are engaged with this system, as they are able to increase their customers and sales by around 20 percent. Banks and agents also benefit as they acquire additional clients.

Editor's Note: An earlier version of this blog post inaccurately stated that the A-Card was designed by CARE. A-Card was originally designed by the USAID Agricultural Extension Support Activity (AESA), led by Dhaka Ahsania Mission, and Bank Asia with support from FHI 360 through the mSTAR project.

I was in the MFI sector and would prefer to push the standard products that will generate higher profits. One thing that you can let the MFIs understand is that working with A-card users and offering them other products like saving and microinsurance services that would enable them to have lasting relationship and create loyal customers.

Diving Into Data on Smallholder Families