Incentives for Small Retailers to Climb the Modernization and Digitization Ladder In emerging markets, traditional small-scale retailers – such as the tienditas of Mexico – can appear to observers as an anachronism. They are neighbors of modern retail chains yet lack modern managerial practices and physical features (such as a clean and informative store facade), and often only accept cash payments from customers. Policy programs for this segment have traditionally focused on business education and cash provision. The implicit assumption here is that if you inform small-scale retailers about modern practices and give them money, they will implement obviously beneficial changes, imitating their modern peers.

Yet when our research team sought to modernize and digitize payments for traditional retailers in Mexico through two randomized field experiments, we encountered limits to this approach. Across our sample of 1148 traditional retailers in Mexico City, and 745 in Guadalajara, a complex portrait emerged of shopkeepers who were already technologically and financially sophisticated in many ways.

Among the retailers in our two samples, internet-connected smartphone ownership was universal. Moreover, if one was to tell these shopkeepers that they could use their smartphones to grow their business, this would not be a particularly novel insight. At baseline, prior to modernizing interventions, over 70 percent of shopkeepers used the internet to seek new products and research prospective suppliers. A similar 6 in 10 engaged in some form of digital marketing using their smartphone. In fact, many were enthusiastic to show us their business Facebook and Instagram pages! They were also aware of digital payment technology and could afford the devices needed.

While we solely targeted cash-only retailers in Guadalajara, more than 8 in 10 of these shopkeepers owned and utilized bank accounts, and around half had taken out formal loans. This is remarkable when benchmarked against national statistics indicating that less than 37 percent of Mexican adults have a bank account. In addition, contrary to the common notion that these retailers minimize their visibility to government authorities, most shopkeepers had obtained a Use of Land permit for the business (53 percent), had formally registered their business with a Tax ID (62 percent), and registered their business as a legal entity with the local government (51 percent).

Therefore, we realized that if we wanted to successfully modernize and digitize this segment, we had to drop assumptions that traditional retailers were simply unaware, poor and avoiding formality. Rather, the shopkeepers are time-constrained entrepreneurs making their best use of available resources to grow their business.

We needed to deeply understand their incentives and formulate a business case to modernize and digitize.

Retailers needed assurance of a return on their modernization investment

This insight was directly validated in our endline survey of the 1148 retailers in Mexico City, conducted a year and a half after our experimental interventions to modernize their stores. Most retail firms said they knew that adopting modern practices and appearances would bring them benefits, but they did not think the returns would justify the expense. They wanted a formal analysis of returns on any modernization investment (Figure 1), just like a proficient entrepreneur operating in advanced markets would.

Through our randomized field experiment that evaluated the causal impact of modernization, we were able to demonstrate to them that they could recuperate the cost of our modernization program within six months. With this insight, we believe, traditional retailers would even consider self-financing their modernization effort. 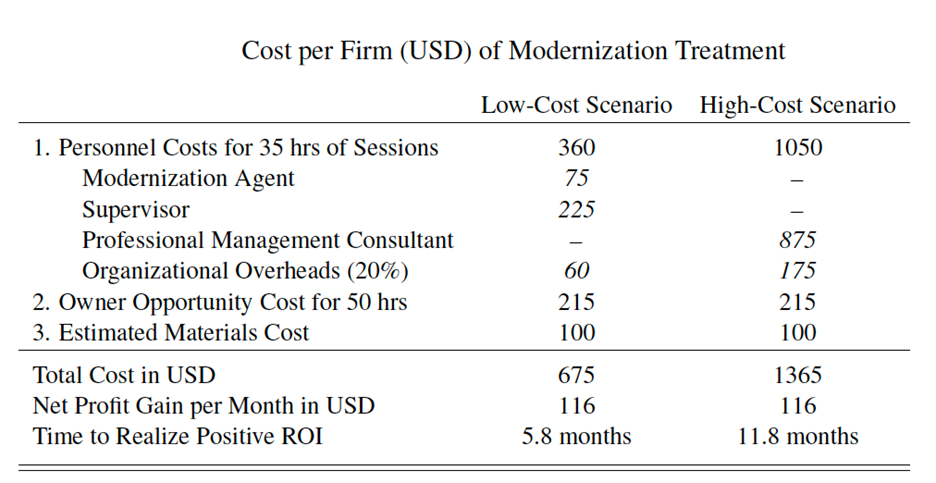 In the context of payment digitization, we found that initial incentives to adopt card readers could be undercut by a rocky technology adoption process. All 745 cash-only retailers in our ongoing randomized field experiment in Guadalajara (supported by the Mastercard Impact Fund in collaboration with the Mastercard Center for Inclusive Growth and Fintech partner Kiwi) had threshold levels of enthusiasm to receive support on payment digitization. Yet, among retailers who received our intensive technology intervention -- IT consultants to deliver and fully set up Bluetooth-enabled card readers in the store -- we recorded complete adoption failure, i.e., zero card transactions, in roughly 30 percent of cases.

Digging deeper, over 26 distinct causes of failure emerged, ranging from stolen or damaged hardware to an unstable Bluetooth connection to the internet connection being too weak for quick transactions. One concerned retailer reported not using the device because they couldn’t install a mandatory software update, but further investigation revealed this was because they had not charged the reader. When we asked retailers if they contacted customer support, the majority reported they were far too time-constrained to navigate a hotline. Compared to platforms they used – like WhatsApp and Instagram – this was a less seamless experience. In an environment where trust in formal institutions is low, these technical glitches are magnified in the minds of traditional retailers.

To provide incentives for retailers to push through the initial adoption phase, we randomly deployed two extra interventions: a quarter of retailers received an extensive marketing intervention that grew customer demand for digital payments (depicted below), and another quarter received a 4-month free trial waiving the transaction fee on card payments.

Receiving these interventions reduced adoption failure by around 15 percentage points. Additionally, for as long as six months after the intervention, retailers who received these incentives had almost double the number of card transactions per month and processed nearly 60 percent more pesos in card transactions. These results suggest that customer demand, as well as financial incentives, to use digital payments provides motivation to overcome technical hitches in the early months of adopting fintech.

Our insights from two randomized field experiments with traditional retailers in Mexico remove some mystery from how digital financial inclusion and modernization can be promoted.

Shreya Kankanhalli is an Assistant Professor at Penn State University. This research on retail modernization is co-authored with Stephen J. Anderson at UT Austin, Leonardo Iacovone at the World Bank, and Sridhar Narayanan at Stanford University.

Nice article thanks for sharing

Shreya Kankanhalli is an Assistant Professor at Penn State University. This research on retail modernization is co-authored with Stephen J. Anderson at UT Austin, Leonardo Iacovone at the World Bank, and Sridhar Narayanan at Stanford University.