As food prices rise, data from the COVID-19 pandemic shows us which households will suffer the most, and what makes them vulnerable Nearly four out of five FINCA customers experienced worsening food security because of the COVID pandemic, according to data we collected in 2020 and 2021. Just as their lives were stabilizing, the war in Ukraine accelerated inflation and upended the supply and distribution of agricultural commodities.  Wheat prices are up 60 percent, and maize has surged 54 percent since January 2021, with increases that are likely to continue through 2024. The World Food Program predicts that the number of severely hungry people will swell to 323 million over the next year.

Climate change will perpetuate these challenges in the future, causing malnutrition and lower agricultural yields. Those whose survival is already a day-to-day struggle will suffer the most, including many FINCA customers.

Food and cash aid are needed to prevent starvation for those in extreme poverty. At the same time, financial inclusion organizations can mitigate some of the worst forms of hunger by supporting self-employment and small-scale farming, which sustain low-income families throughout the world.

The first step is identifying who is most at risk and why. With timely support by the Social Performance Task Force, FINCA collected data on our clients’ food consumption during the COVID pandemic and, using machine-learning analysis, we were able to identify specific characteristics that separated those who experienced different levels of hunger.

77 percent of customers reported food insecurity at different levels of severity, ranging from reduced consumption to going a day or more with nothing to eat.

Our consolidated data, covering 11,000 respondents from 13 countries, delivers a clear picture of the risk factors that predict deteriorating food consumption. As illustrated in the figures below, our data show who was affected and how, by estimating the relative contribution of each risk factor and their cumulative impact. 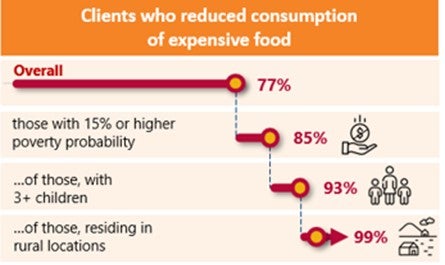 Reducing Food Quality. Eliminating “expensive” foods, like meat and dairy, was extremely widespread. Unfortunately, removing these foods from the diet can have severe health consequences, particularly for children and pregnant or nursing mothers.

Income is the obvious risk factor for those who employed this coping mechanism. Eliminating the top earners in our sample (those with a poverty probability lower than 15%) raised the likelihood of degraded food quality from 77 percent to 85 percent. When considering household size (three or more children) and the disadvantages of living in a rural area, we reach a 99 percent probability that the household downgraded their food consumption. This is a vivid example of the particular vulnerability of smallholder farmers, who suffer the most from malnutrition and whose livelihoods are directly impacted by supply chain disruptions and climate change. 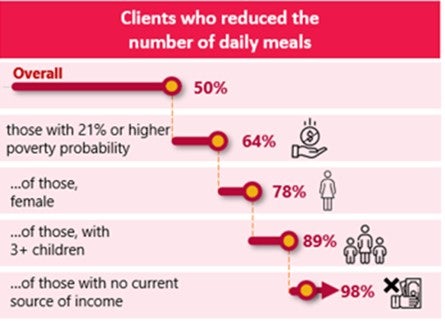 Skipping Daily Meals. Under normal circumstances, skipping the occasional meal is not particularly worrisome. But when it is repeatedly forced upon a household due to the inability to procure food, it raises a major concern. Our model shows that when we increase the poverty threshold even moderately (to at least 21 percent probability), the likelihood of regularly skipping meals increases from 50 to 64 percent. Gender is the second risk factor, especially when compounded with a larger family size of at least three children. This is consistent with other findings that women and girls tend to eat last and least within the household, which is why they account for 60 percent of the chronically food insecure. 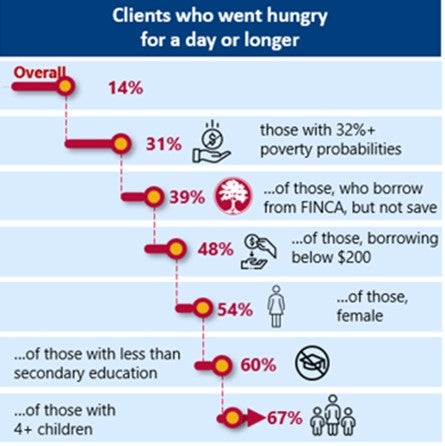 Severe Hunger. About 14 percent of our clients reported going hungry for a full day or longer. We identified a distinctive set of risk factors that increase the probability of severe hunger from 14 percent to 67 percent. Income of course is highly influential; by taking out those with a 31 percent or lower probability of poverty, the incidence of severe hunger more than doubles from 14 percent to 31 percent.  Interestingly this is the only class of food insecure customers where specific financial behaviors function as identifiable risk factors – people who have no savings with the bank and who borrow in very small amounts (in addition to having at least a moderate poverty probability) have a 48 percent probability of experiencing severe hunger.

From there, the risk is further elevated among women with less than secondary education and a higher burden of childcare.  Anyone unfortunate enough to have all these conditions – i.e., a moderately poor woman with lower education, more children, no formal savings and borrowing a small amount – has a 67 percent chance of experiencing severe hunger. So, while the overall incidence is “only” 14 percent among the clientele at large, the compounding effects of some pretty common risk factors like low income, gender and education quickly amplify the risk to much higher levels.

On a technical note, the classification model for severe food problems (going a day or more without eating) required a larger number of risk factors and maxed out at 67 percent probability, while the less severe categories used fewer variables to achieve close to 100 percent certainty. We interpret this to mean that the issue is deeper and more involved than our available data can depict. Further information is needed to build a stronger model.

Addressing Food Insecurity as an MFI

Of course, even as they deepen our understanding of food insecurity among our clients, the technicalities of our statistical modeling should not overshadow the human toll when an entire class of women are going to bed hungry, or the terrible implications for the health and wellbeing of their families.

World leaders are calling for urgent action, warning that for each percentage point increase in food prices, 10 million people are forced into extreme poverty. To address the issue of food insecurity among our clients, FINCA is strengthening its focus on financial health and resilience across many areas, especially product development, service delivery and research.

We aim to help customers avoid hunger by enabling them to build wealth and manage financial resources. We are also devoting more resources to sectors directly related to food production, such as agriculture, food processing and distribution, while investing in technologies that help us serve people in remote areas.

While the COVID-19 pandemic was a once-in-a-generation event, affecting everyone at the same time, food insecurity will be a more localized and seasonal problem, impacting certain households and countries more than others. The scale of the challenge may be smaller than a pandemic, but its worst effects could be even more severe. Our response to food insecurity and hunger must consider the risk factors that predict who will be affected the most.

Scott Graham and Anahit Tevosyan are the lead researchers for FINCA International, where their work focuses on the adoption, use and social impact of microfinance and other market-based poverty solutions.

Andrée Simon is the President and Chief Executive Officer of FINCA Impact Finance (FIF), a global network of microfinance banks and institutions.

Scott Graham and Anahit Tevosyan are the lead researchers for FINCA International, where their work focuses on the adoption, use and social impact of microfinance and other market-based poverty solutions.

Andrée Simon is the President and Chief Executive Officer of FINCA Impact Finance (FIF), a global network of microfinance banks and institutions.

Client Research and Product Development, COVID-19
You May Also Like
Blog