How does the Pacific stack up to the Global Findex? Earlier this year, the World Bank released the much anticipated Global Findex Database 2017 publishing another installment of the most robust, bird’s-eye view of financial inclusion across the globe.

While most countries are represented in the data set, there are currently no Pacific Island Countries (PICs) included in the Global Findex, nor are there any Small Island Developing States (SIDS). How do these countries stack up against their peer groups or global trends?  To answer this question and address the lack of a similar data set, several PICs’ central banks and Pacific Financial Inclusion Programme (PFIP) convened in 2014 and then spent the following few years engaged in collecting and curating large-scale, nationally representative demand-side surveys. These studies were harmonized with the Global Findex, allowing for some benchmarking and insights.

We acknowledge that the Global Findex and the Pacific demand-side surveys used differing methodologies and should keep this in mind when interpreting comparisons. However, both surveys are rigorous, demand-side exercises, and similar enough in their rigor to warrant useful comparisons.

This post looks at a few of these comparisons for the first time. In some cases, the Pacific echoes what we see in the Findex, but there are some poignant divergences as well. Here are a few things we notice when we line up the Pacific data with the Global Findex:

Overall, PICs have the same levels of access as Sub-Saharan Africa

Our surveys show that as a region, the average estimated percentage of adults with access to formal financial services is around 41 percent - far lower than both the world and developing countries peer groups, and similar to that of Sub-Saharan Africa at 43 percent. While myriad dissimilarities exist between the Pacific and Africa, both areas struggle with challenges in building infrastructure (or digital "rails") in remote areas and among sometimes isolated populations. However, the Pacific data does not yet include Papua New Guinea (PNG), the country with the region’s highest population and likely lowest access. If PNG were included in the data set, the overall Pacific figure would be much lower. 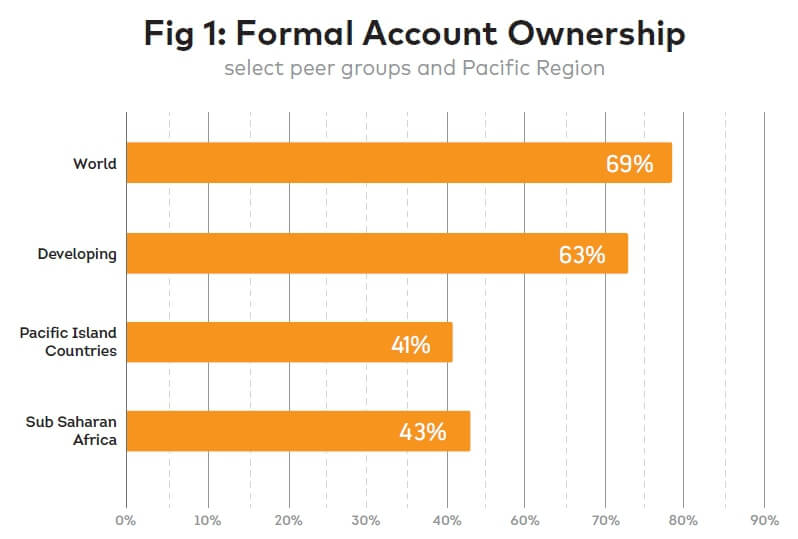 Individual footprint is as diverse as the islands themselves

When unpacking the regional grouping (Fig 1) into separate countries, an extremely varied picture emerges. Fiji, the region’s most developed country, has the highest rate of adult account access at 60 percent, and Solomon Islands takes up the rear with 26 percent. Fiji is roughly on par with the rest of the developing world in 2017 and situated between the upper middle-income countries and lower middle-income countries in terms of overall financial inclusion. All other countries remain far behind any of their peer groups.

However, both the world and developing countries peer groups contain population giants like India and Kenya, which are experiencing rapid transformation of their financial sectors due in part to their Fintech revolutions, made possible with large, dense markets. Pacific markets are of an utterly distinctive character, and it would be unrealistic for Pacific countries to mimic this outreach soon.

While the Global Findex shows more women gaining access to financial services - increasing 7 percentage points from 2014 to reach 65 percent in 2017 - the gender gap remains unchanged at 9 percentage points in developing economies. Overall, the financial inclusion community has not managed to address the systematic barriers which prohibit women from gaining access to accounts, and the Findex data, stubbornly unchanged from previous years, highlights this wake-up call. 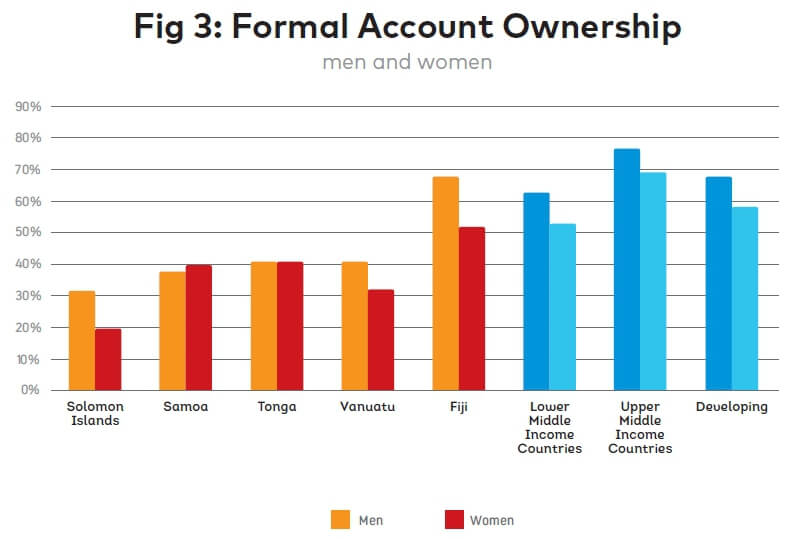 The Solomon Islands and Fiji contain the biggest gender gap at 12 percent and 16 percent respectively. However, Tonga and Samoa completely buck the trend with equal or better access to accounts for women (0 percent difference and +2 percent respectively). This is only present in a few other countries across the world (Argentina, South Africa, Indonesia).

Most people saved something

The Pacific outperformed their peers in term of saving via any means in the last year. Solomon Islands showed a particularly high propensity for this behavior, although a low tendency for using formal accounts to do so. 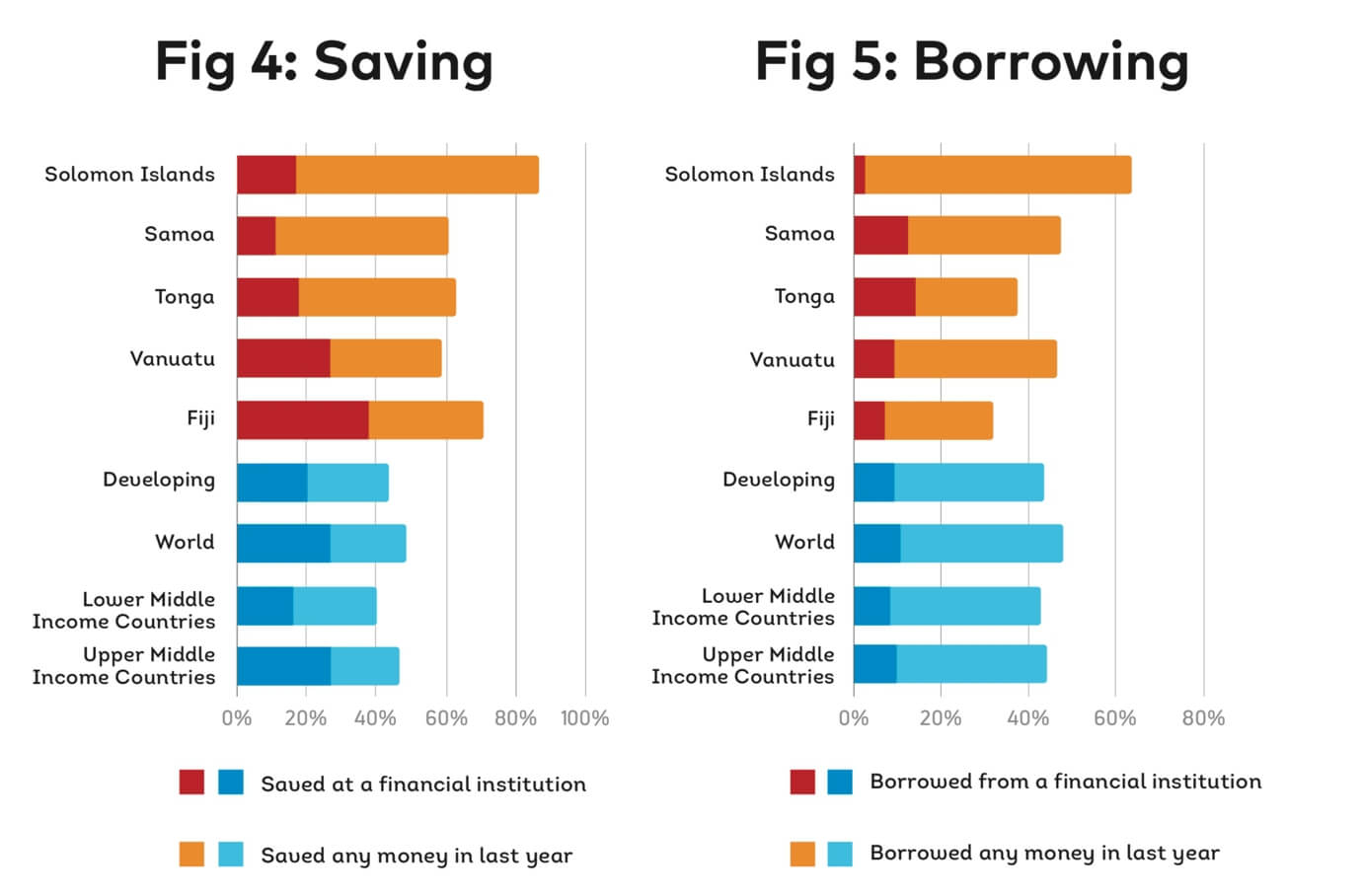 Borrowing, both formal and informal, showed less of a stark difference between the peer groups and the PICs. Samoa and Vanuatu are very similar to upper and lower middle-income countries. Across the board, like all the peer groups, PICs have a much higher rate of informal borrowing.

The role of mobile

We see that among peer groups in which there is a leap in inclusion (World, Developing World), there has been a corresponding leap in people reporting they have digitally paid a bill in the last year. In the Pacific, the number of people who have paid a bill digitally is very small or nonexistent, indicating that mobile money has not caught hold – even for early adopters. All PICs are under 1.5 percent on this data point, with three countries at zero, including Fiji – the region’s most financially included country. The Fiji demand-side survey found that 10.6 percent of people had a mobile account, but usage of those accounts is miniscule. Other countries did not report this indicator, another sign of the lack of reliance on mobile for accessing financial services.

This hints at what we anecdotally know to be true: mobile is not driving financial inclusion in the PICs. There are extreme differences in the role mobile plays in getting financial services to people across the world, and PICs are trailing the pack. 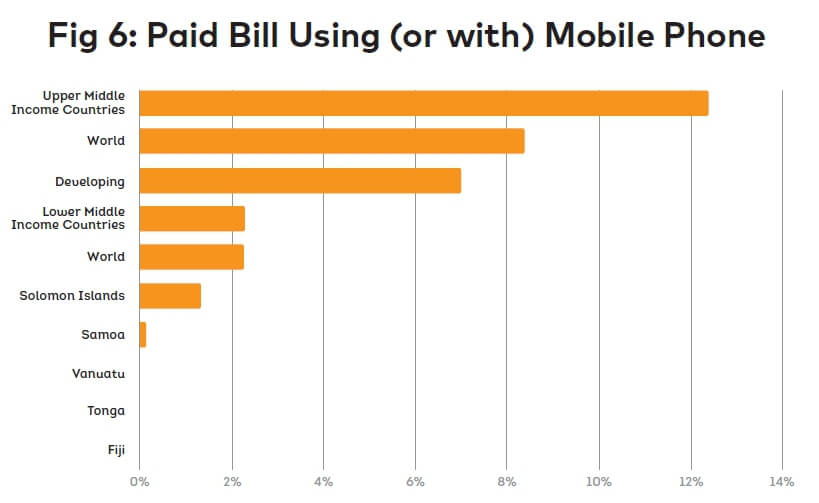 While the PICs lag behind their peers on some important levels, they also show a respectable level of financial inclusion given the sparsely populated and remote markets with low levels of infrastructure.

In a region where mobile is minimal, and cash is king, there is scope for new innovations in technology to take hold and help drive expansion, as they have in other areas the world. PFIP is engaging more on the latest global initiatives in financial inclusion, and increasingly in fintech – creating the digital rails, new credit products, artificial intelligence and payment solutions, just to name a few. We hope to bring these lessons to the Pacific, ensuring – along with other key actors – equitable, sustainable growth, maximizing the latest technology deployed across the world.

Write for us
View 4 Comments

Thanks, Liz, for your excellent article. This comparison is so useful and critical for those of us operating in the Pacific Island Countries. It's important for us to understand how we stack against the rest of the world, and you have nicely and clearly captured the information. I look forward to seeing what happens with access data once PNG is added to the mix.

Polly, thanks so much and I am glad you liked the article. Adding PNG would be a fascinating comparison indeed. Hope we can do that someday...

This article gives great insights into how the Pacific is faring in relation to financial inclusion. Well done PFIP for working with PICs to fill the data gap that global indices often have for Oceania.

Anna, thanks so much for your comments and glad you appreciate the comparison.