How Do Digital Remittances Contribute to Women’s Financial Health? Women make up about half of 281 million migrants living and working abroad. Sending and receiving money, an experience that goes hand in hand with migration, plays a key role in contributing to the financial resilience of migrants and their beneficiaries. However, there is a gender gap in women’s access to and usage of remittances, and researchers and practitioners increasingly recognize that remittance patterns are gendered.

In this blog post, we explore what we know about how gender affects remittance patterns and what a recent United Nations Capital Development Fund (UNCDF) survey tells us about how digital remittances can help improve women’s financial health.

Financial health in the context of remittances 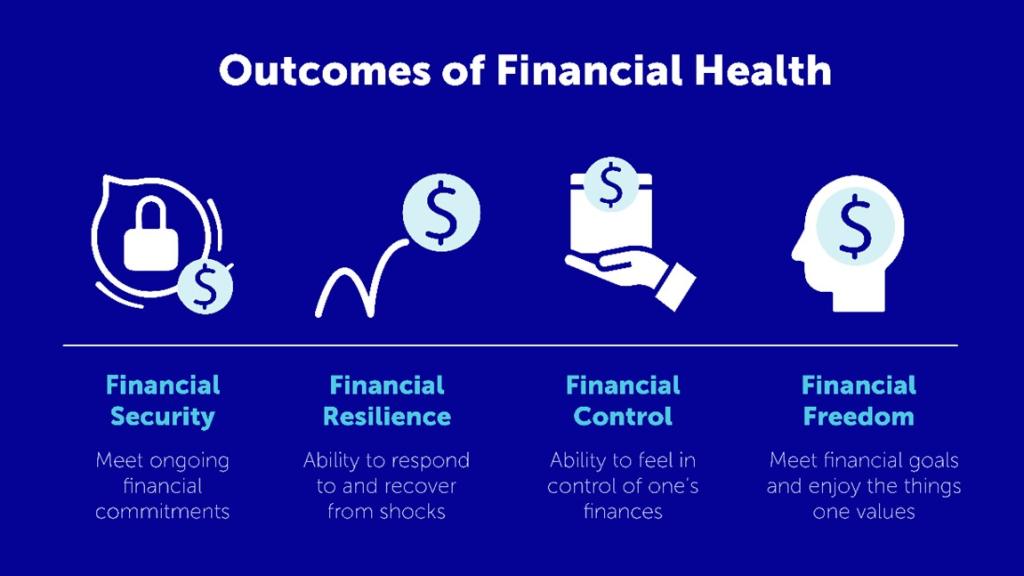 Financially healthy migrants and their families can meet their current needs, absorb financial shocks, pursue financial goals and feel secure about their financial lives. In the context of remittances, a financial health framework helps us to define, measure and ultimately improve the impact of remittances on individuals’ lives in both host and home countries.

Gender roles, norms and inequalities influence access and usage in terms of the amounts, frequency and channels used to send and receive remittances, as well as how and by whom the money is used. For example, evidence suggests that women migrants tend to remit more of their income than men, and they send money more frequently. On the receiving end, women remittance recipients spend more money than men on household members' nutritional, educational and healthcare needs, especially on children. Data also suggest that women migrant workers are concentrated in sectors that are less vulnerable to financial crises and economic downturns, such as domestic work, meaning their remittances are more stable during such periods.

Despite these advantages to women’s remittances, we have found that women’s uptake of digital remittances is low.

UNCDF's analysis of 80 million transaction records from seven remittance service providers found that women represent only 9 to 39 percent of digital remittance senders, depending on the corridor, and 22 to 43 percent of digital remittance recipients. This is despite the fact that women represent the majority of remittance recipients in several countries such as Bangladesh, Nepal and the Gambia. The low digital uptake among women is due primarily to the persistent digital divide in mobile phone ownership. For example, only 65 percent of women in Bangladesh own mobile phones compared to 84 percent of men.

So how can digital remittances help contribute to women’s financial health? To understand this relationship better, UNCDF analyzed data from phone surveys of 3,000 remittance customers from both cash and digital channels (50 percent of whom were women) across six countries: two remittance-sending countries (Republic of Korea and the United Arab Emirates) and four remittance-receiving countries (Bangladesh, Ethiopia, Nepal, Senegal). The survey asked five core questions on financial health to understand how individuals felt about their ability to handle financial emergencies, their confidence in handling money and their stress levels over receiving remittances. We found that digital remittances helped strengthen women’s financial resilience and financial control, both key elements of financial health. Specifically:

Data from the survey showed that almost three-quarters of women who received remittances via digital channels had sufficient emergency funds (5 percent of GNI per capita), compared to 45 percent of the general population in the countries surveyed (see figure below for a breakdown by country). 52 percent of the women recipients indicated that their ability to handle financial emergencies had improved since they started using digital remittance services. 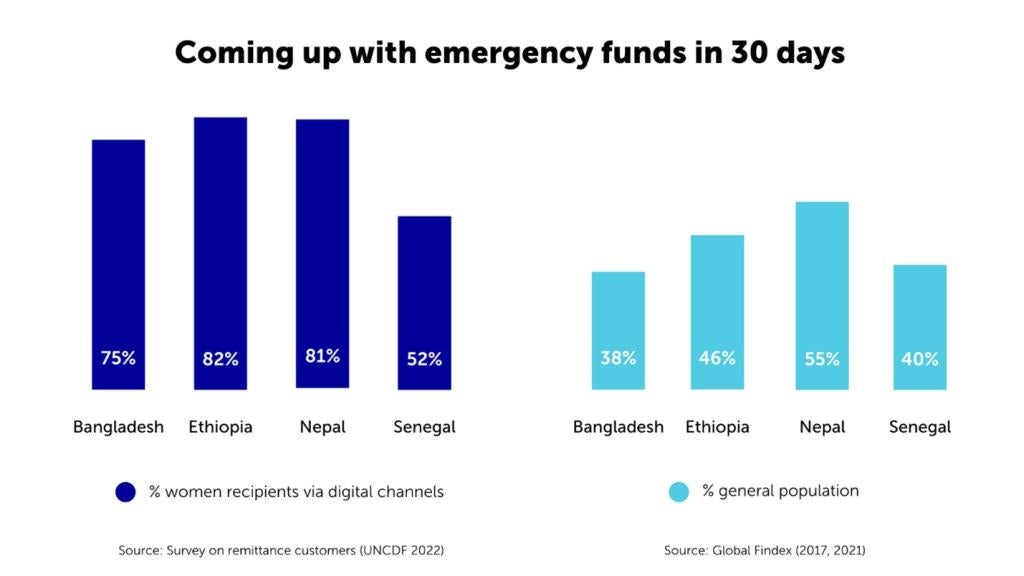 Financial control is a subjective measure of financial health because the feeling of being in control or financially distressed can vary between individuals and households, even under similar financial conditions. Data from the survey showed that 72 percent of women remittance senders and 53 percent of women remittance recipients reported that their confidence in handling money had increased since they started using digital remittance services. In addition, 62 percent of women who received remittances via digital channels reported having full control over them, which is a higher percentage than those who received remittances via cash channels (46 percent). 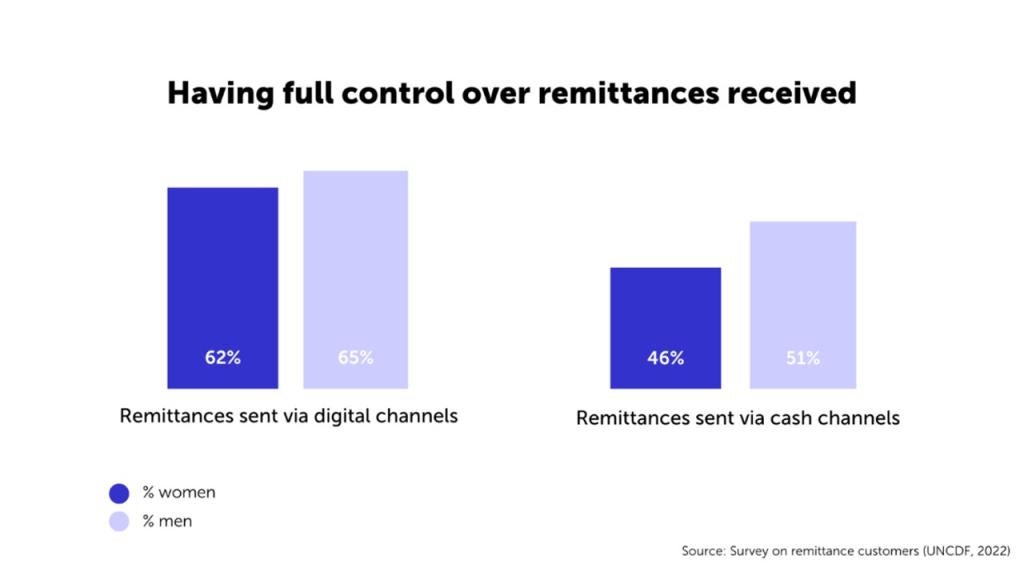 Digital remittance services that enable women remittance senders and recipients to track their transfers and confirm receipt quickly, that are easy and intuitive to use and offer greater privacy, could boost their confidence in handling money.

These initial survey results are promising and further research is needed on how digital remittances relate to other aspects of financial health, such as financial freedom. But it is clear that more migrants, particularly women and their families, need faster, safer and more convenient digital services to remit and receive money. Financial service providers in remittance-sending and remittance-receiving countries must design and deliver gender-smart and migrant-centric remittance products to help ensure that all migrants can benefit equally from the promise of digital remittances on their journey towards improved financial health and inclusion.

Uloma Ogba is Lead Gender, Migration and Remittances at UNCDF.

Houle Cao is Systems and Research Specialist, Migration and Remittances at UNCDF.

Julie Kamau is Gender and Research Analyst, Migration and Remittances at UNCDF.

Uloma Ogba is Lead Gender, Migration and Remittances at UNCDF.

Houle Cao is Systems and Research Specialist, Migration and Remittances at UNCDF.

Julie Kamau is Gender and Research Analyst, Migration and Remittances at UNCDF.

Client Research and Product Development, Gender and Women's Empowerment, Remittances
You May Also Like
Blog