Financial Inclusion in the Wake of the Pandemic

While poor and women borrowers suffered the most, they also benefited the most from gaining access to financial services

The COVID-19 pandemic affected everyone around the world, from north to south, rich to poor and men to women. But the level of suffering was not distributed equally, even among microfinance borrowers.

Whose financial situations worsened the most? Who received more support from lenders? And who benefited the most from financial inclusion during this period?

To explore these questions, Triple Jump, in coordination with Banco de Desarrollo de América Latina (CAF) and the Responsible Inclusive Finance Facility for Southeast Asia (RIFF-SEA),  conducted surveys among five of Triple Jump’s partner financial institutions in South America and Southeast Asia. The surveys, carried out by 60 Decibels, reached 1,638 microfinance borrowers during the second half of 2021. For three of the partners - in Colombia, Peru and Cambodia - two rounds of interviews were conducted, and data disaggregated by poverty level and sex are available.

What we found was illuminating, though not totally surprising. Borrowers living in poverty and female borrowers were the most affected by the COVID-19 pandemic, but they were also the strongest beneficiaries from financial inclusion in the wake of the global COVID-19 pandemic.

In this blog post, we look in more detail at the findings from these surveys.

Whose financial situations suffered the most?

The data showed that borrowers living in poverty were more likely to be negatively affected financially by the impact of the pandemic. Poor respondents were about 50 percent more likely than non-poor respondents to report that their family’s financial situation had become “much worse.”

Who received more support from lenders?

In all three countries, financial institutions provided support measures for some of their clients, usually in the form of payment deferments. However, these measures appear not to have been driven by borrowers’ poverty level.

Instead, in all three countries, respondents living above the poverty line were more likely to benefit from such support measures. While the reasons for this are unclear, it is possible that poorer borrowers were less leveraged overall, and therefore less likely to require payment deferments or other support measures to keep financially afloat.

Percentage of borrowers who received lender support, by poverty level 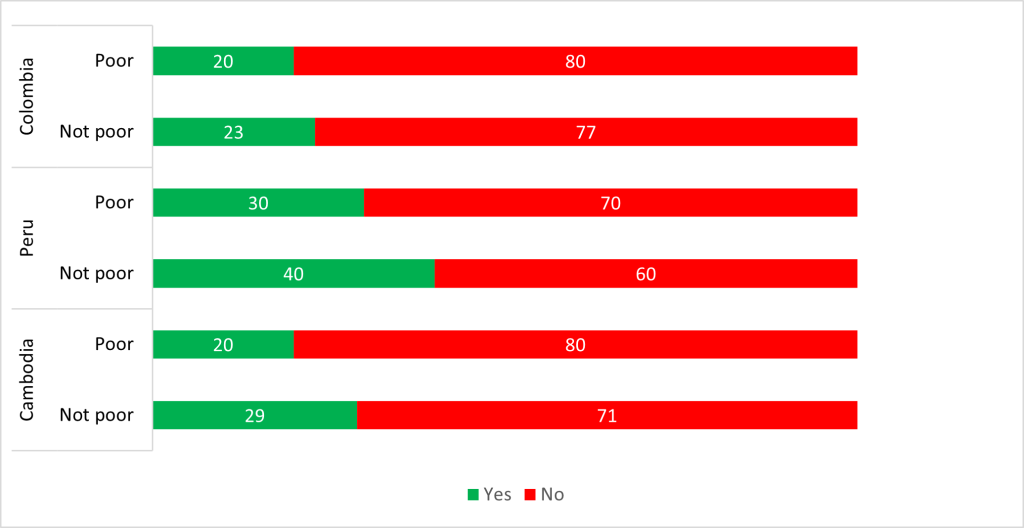 How did financial inclusion affect borrowers a year after the pandemic began?

Over one year into the pandemic, a majority of borrowers in all three countries reported that their quality of life had improved as a result of being able to access financial services.

In addition, in two of the three countries, financial inclusion especially benefited borrowers living below the national poverty line. The difference was most pronounced in Peru, where 70 percent of poor clients credited their relationship with their financial service provider with improving their quality of life, compared to 61 percent of non-poor respondents.

Even though the poorest borrowers had benefited less from lender support measures during the pandemic, these data suggest that financial inclusion reduced their vulnerability and strengthened their resilience.

Financial inclusion impact on quality of life, by poverty level 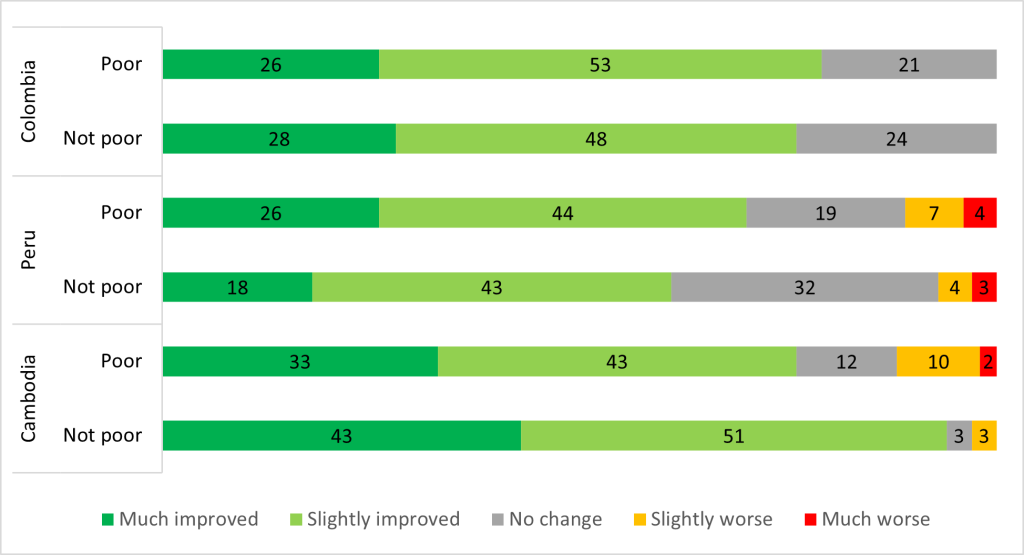 Women appear to have reaped the greatest benefits of financial inclusion. Across all countries, women were about as likely as men to report that their quality of life had improved thanks to their relationship with a financial institution. However, the proportion of women reporting that their life had “much improved” was consistently significantly higher than that of men.

At the same time, men and women were equally unlikely to suffer declines in quality of life as a result of access to formal finance.

Changes in quality of life, by sex 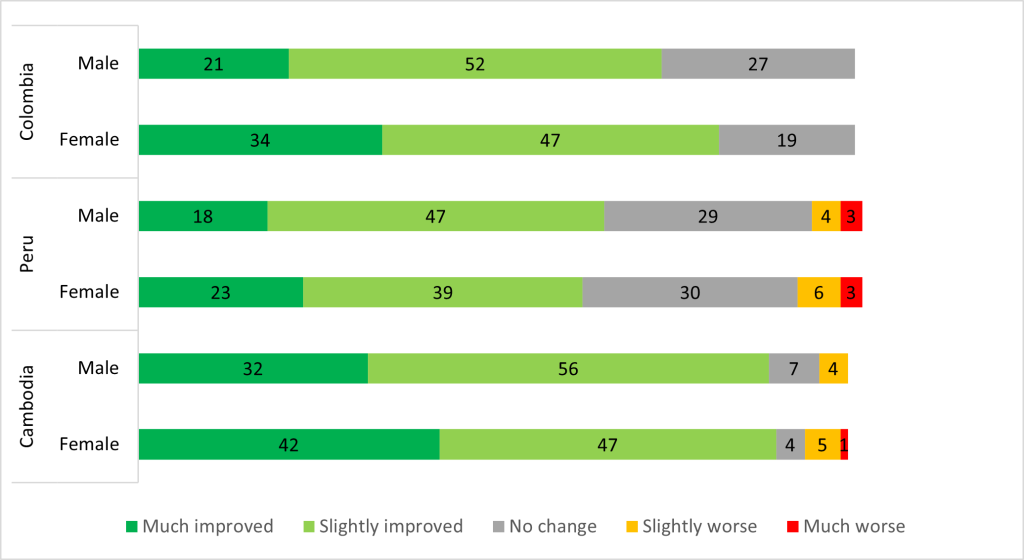 In the aftermath of the pandemic, we found that poor and female borrowers benefited the most from financial inclusion. But there is still more to do, of course. Financial service providers may wish to follow up with measures such as post-pandemic help programs focused on the most affected groups. For clients whose income sources will take a while to return to normal, especially women, flexible payment schedules could help. Financial service providers can also provide support to and explore solutions with clients who expect their businesses to permanently change as a result of the pandemic. Finally, lenders may also consider re-examining whether support measures offered in times of crisis could be better targeted at marginalized or vulnerable populations, such as their poorest clients.

By Till Bruckner & Juan Luis Podesta

Till Bruckner is an independent consultant with more than ten years' experience in MSME finance and financial inclusion. Juan Luis Podesta is Senior Technical Assistance Manager for Triple Jump, an impact-focused investment manager that provides financing and support to companies in emerging markets.

By Till Bruckner & Juan Luis Podesta

Till Bruckner is an independent consultant with more than ten years' experience in MSME finance and financial inclusion. Juan Luis Podesta is Senior Technical Assistance Manager for Triple Jump, an impact-focused investment manager that provides financing and support to companies in emerging markets.