What Findex 2021 Tells Us About Financial Inclusion in India Financial exclusion has long been the reality for much of India. Indian households and businesses hold their wealth primarily in physical assets like real estate, gold, and durables, while barely investing in any financial assets. For their financial needs, they rely mostly on informal sources like moneylenders, informal savings, credit groups (popularly known as chit-funds) and social networks. Accordingly, their interaction with the formal financial system has remained low.

To tackle these high levels of informalization and financial exclusion in India, policy focus in recent decades has shifted towards financial inclusion.

Significant strides have been made, especially over the last ten years, which have seen India’s quest for universal financial inclusion advance rapidly. Although the pandemic years slowed this pace of change, the increasing adoption of digital payments holds promise for growth in usage of formal financial services.

In this blog post, we share what the World Bank’s Global Findex 2021 Database tells us about how financial inclusion has advanced in India and what still remains to be done.

Rapid progress witnessed in the last decade has stagnated

Between 2011 and 2017, financial inclusion progress advanced rapidly in India, as we can see in the Global Findex data from those years:

These improvements were not only observed among the more privileged segments, but also among older, female, rural, low-income and less-educated segments.

But the latest data from 2021 show that the pandemic years slowed or even reversed some of this progress, with bank account ownership stagnating (78 percent), debit/credit card ownership decreasing (28 percent) and fewer people saving in financial institutions (13 percent). 20 percent of the population remains excluded from the financial system because of a range of barriers including distance, high transaction and time costs, insufficient funds, lack of trust, lack of proper documentation, religious reasons and social norms.

The potential of digital payments

Digital financial services (DFS) are helping to mitigate this slow-down and keep progress towards financial inclusion moving forward. As union and state governments increasingly channeled payments and benefits such as COVID-19-related relief directly to the PMJDY bank accounts of beneficiaries, withdrawals from these accounts increased, reducing the share of inactive bank accounts marginally from 38 to 35 percent between 2017 and 2021. Mobility restrictions and health concerns associated with COVID-19 have given a further boost to digital financial services. Between 2014 and 2021, the share of adults aged 15+ with mobile money accounts increased from a mere 2 to 10 percent, while those having made or received digital payments rose from 22 to 35 percent.

Simultaneously, the government has made a strategic shift away from cash and towards digital payments for welfare transfers, pensions and wages. Among those who received any kind of government payment, the share of cash recipients decreased from 49 to 11 percent between 2014 and 2021 (Table 1). Wages and remittances have seen a similar shift. While in 2014, 79 percent of all wage earners received their wages in cash, by 2021 it had shrunk significantly to 43 percent. During the same period, the share of individuals sending or receiving domestic remittances in cash was halved from 67 to 33 percent (Table 1).

Increased usage of and familiarization with digital payments could have important implications for financial inclusion overall. The Global Findex report highlights that adults in developing economies who receive payments into an account are more likely than the general population to also make digital payments and to store, save and borrow money formally. Studies have also shown that changing the default method of wage payment from cash to bank account transfer can induce people to save more.

However, increased access to digital financial services and its usage in India remain contingent on removing infrastructural barriers and designing digital interfaces to suit the needs of those with feature phones, living on low incomes and with limited digital and financial literacy.

Though the adoption of digital payments has gained momentum in India, it has not reached all segments of the population evenly.

Women are also lagging behind in ownership and usage of financial services (Figure 1). Not only do they have lower access to financial services such as credit or debit cards and mobile money accounts, but they also fall behind in using the services that they do have access to. A higher percentage of women have inactive bank accounts than men, while fewer women have made or received digital payments and borrowed or saved formally. 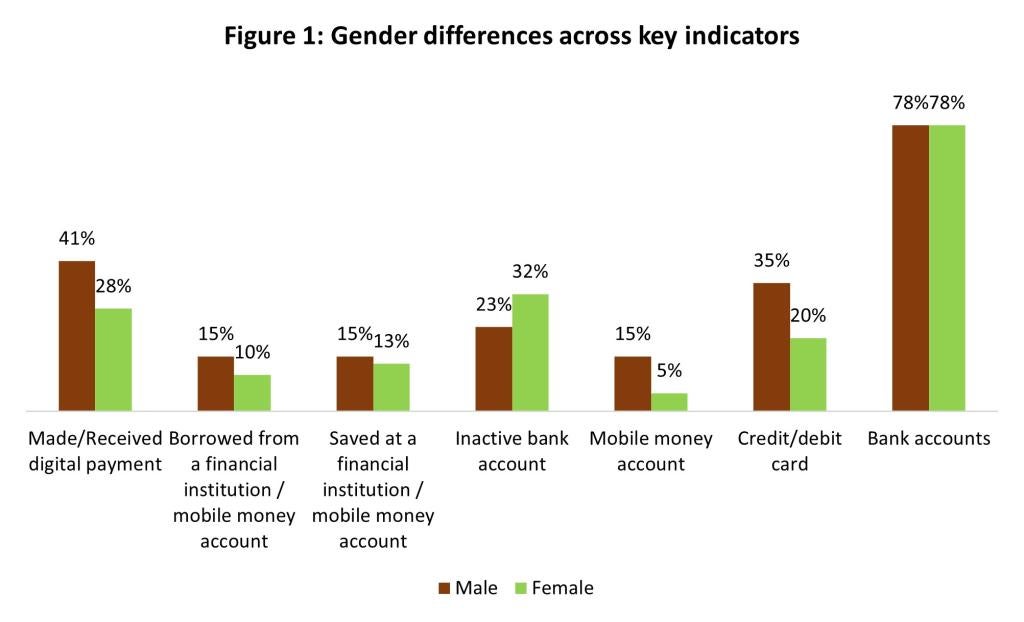 Although these gaps may be caused by a range of factors besides gender, they point towards the need for financial inclusion efforts in the coming years to focus not only on bringing more people into the formal financial system but also on bridging these specific gaps.

Recent strides made by digital financial services are helping drive financial inclusion, but infrastructural barriers remain in successfully disseminating these services to a wider population.

“Phygital” (physical + digital) infrastructure needs to be strengthened for building a resilient digital financial ecosystem. With only 37 percent of India’s rural population actively using the internet, offline, human-assisted touchpoints are crucial for the last-mile delivery. Finally, open digital ecosystems must be made more efficient, accountable and customer-centric to boost the demand for such services.

Niyati Agrawal and Rakshith Ponnathpur are Research Associates with the Household Finance Initiative and Data Analytics Associates at Dvara Research.

Niyati Agrawal and Rakshith Ponnathpur are Research Associates with the Household Finance Initiative and Data Analytics Associates at Dvara Research.

The Global Findex Database: Financial Inclusion, Digital Payments, and Resilience in the Age of COVID-19

The Power of Jan Dhan: Making Finance Work for Women in India